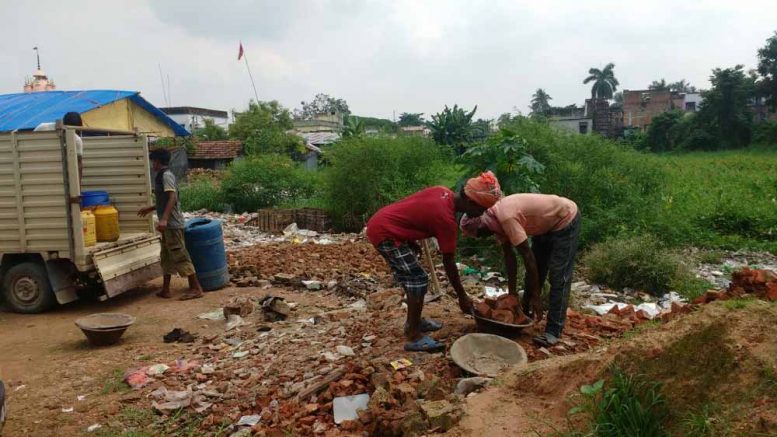 Chakdaha, Sept. 10: A nature lovers’ organization in Nadia’s Chakdaha have alleged that a notified pond with an area of about 5 bigha land is being filled up illegally with debris and waste during the past few weeks by the land mafias in Netaji Park area under Ward-8 of the town. Chakdaha Municipality authority lodged a police complaint in last week after the members of Chakdaha Biggyan O Sanskriti Sangha brought the matter to notice of the chairman Dipak Chakraborty. However, even after expiry of a week, the police yet to act as the miscreants have recently started filling up the pond in the dark of night. On the other hand, miscreants have threatened to kill the local Trinamul councilor and a development committee member as they also raised objection against filling up of the pond.

Bibartan Bhattachjarjee, a member of the organization said: “Initially when the filling being done in daylight police went to the spot and asked the labourers to stop work. But, the miscreants later started filling up work during night”.

Meanwhile, local Trinamul Councilor Dibakar Chakarboarty, who put some banners making people aware against the illegal filling up of the pond, has been threatened of dire consequences if he tries to put hurdle before the filling up work. He has lodged complaint against six persons at Chakdaha police station. However, no one has so far been arrested.

Chakraborty said: “On Saturday evening when I was having tea sitting at the part office in Netaji Park six miscreants entered there and threatened me to kill. They also threatened Ward-8’s development committee secretary Joydeb Mukherjee of dire consequence if we put any objection against filling up the pond”.

Sub divisional officer of Kalyani Swapan Kundu said: “An inquiry has been started into the matter and necessary action will be taken against the miscreants”