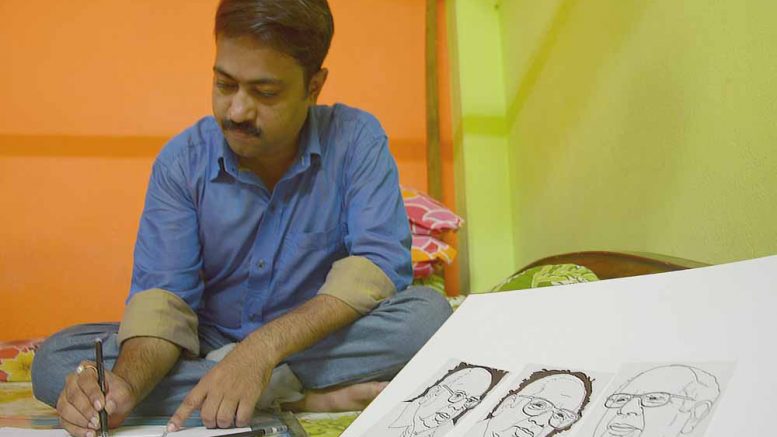 Ranaghat, Aug. 13: Sujit Mandal, a young artiste paid tributes to the departed former Lok Sabha speaker Somnath Chatterjee by drawing portraits in Ranaghat on Monday morning. Sujit, who runs an art school in the town, had drawn five sketches of Chatterjee’s different moods as speaker which also mark his five decades as parliamentarian. A keen follower of Chatterjee’s articulated handling as speaker of Lok Sabha, Sujit, took around two hours to complete the five sketches which he made using a ball point pen.  A little after the news of saddened demise of Chatterjee was announced, Sujit,  a natural artiste by birth, decided to pay tribute in own way. He took papers and pen and started making sketches drawing a huge crowd in the town. He told newsfromnadia.in, “I liked Somnath Chatterjee very much and decided to pay my respect to him in own way. I am an artiste. So I thought it would be best to pay my tribute to him by drawing his sketches. So I tried to portray his different moods in parliament”. “He was a great parliamentarian and after all a true gentleman, which is rarely seen in today’s politics. He will always be remembered for his transparent character, non partisan and honest role as the Lok Sabha speaker”, Sujit added further. NfN Picture