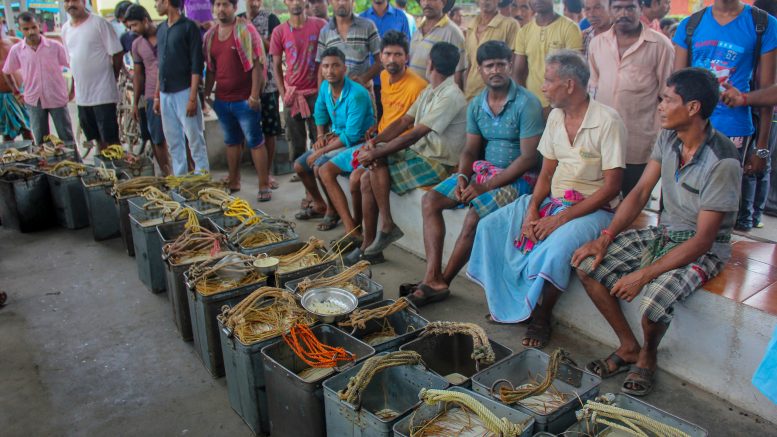 Santipur, Aug. 14: Angry local residents beaten up over two dozens of milkmen at Santipur railway station in Nadia on Tuesday morning accusing them of adulterating milk using chemical with which they regularly make curdle and supply to numerous confectioners in the city market. The locals turned violent as they found that the milk they bought from them to cook “Payesh” on Monday for a puja had developed a rubbery when they boiled it. The angry residents of station para brought down over one hundred milk cans from a Sealdah bound train and drain it after collecting samples to send it to a test laboratory run by state run milk cooperative in Krishnagar. In retaliation the milkmen alleging harassment blocked railway tracks at the Santipur station, but the villagers chased them away.

The villagers later submitted a complaint at the RPF outpost at the Santipur station. However, Nadia district magistrate Sumit Gupta said that a probe will be ordered to ascertain the veracity of the allegation.

Trouble began at about 9am when the milkmen boarded a Sealdah bound train to go Phulia. Some members of a Shiv Puja committee from station para arrived there and brought down the milk cans and barricaded the milkmen accusing that 30liter of milk which they bought from them on Monday for a religious festival had turned ‘rubber’ when boiled. Milk that turned rubbery after boiled

Chiranjit Sarkar, member of the puja committee, said, “We were cooking payas with the milk, but it turned a rubbery item once milk was started boiling. There was no flavour of milk. Cooking of payas had to be abandoned”.

“I have heard that milk is often adulterated with detergent, water soluble adhesive, caustic soda and many other chemicals. I also had seen many viral videos of adulterated milk. But, for the first time I experienced it in reality. I have no idea what chemical milkmen had used, but definitely it was not milk actually. I am afraid that lakhs of people regularly consume such milk in the form of sweets. So we decided to examine it to identify the chemical to adulterate milk”, said Pradip Biswas.

Meanwhile, milkmen refuted allegation of adulteration. Bappa Ghosh, a milkman, said, “We collect milk from door to door and then collectively took it to Phulia to make curdle which we later supply to confectioneries in Calcutta. We never adulterate mikk. But, it is not possible for us to identify if people from whom we collect milk mix anything in it”.

The milkmen said every day from 7am to 1pm over about five thousand litres of milk are taken to Phulia by milkmen from Santipur and adjacent places. Huge quantity of milk curdle also sent to Calcutta from Krishnagar, Taherpur, Chakdah, which are made by mixing toilet acid (muriatic acid) into milk.

DM Nadia Sumit Gupta said, “Allegations of adulteration is very serious. We will conduct a probe and take necessary legal action against the milkmen”.