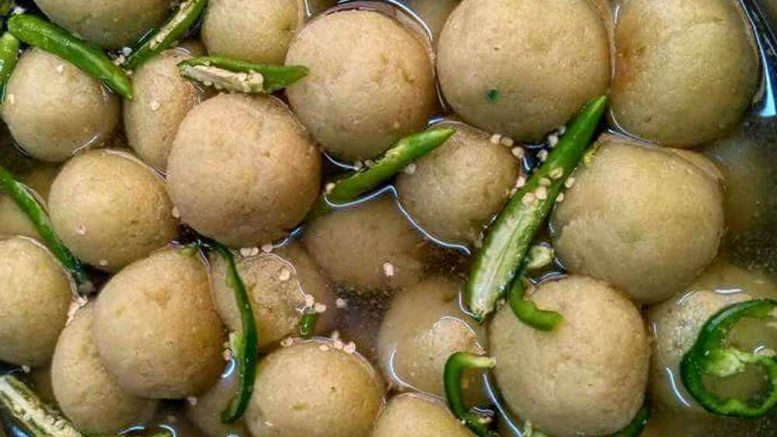 Ranaghat, Jan. 14: The foodies at the Rasogolla Utsav in Nadia’s Ranaghat got a ‘hot’ experience while reeling under the cold spell when they tried the ‘Jhaal’ Rasogolla today, courtesy Somnath Kundu, a local confectioner. This may sound whacky, but for 45 years old Somnath it was no fun as he dared to change the taste of this traditional Bengali desert little tangy.

The paste of green chilli provides a greenish look to the Rasogolla. Somnath has set the price of each Rasogolla Rs.12. Somnath said that he decided to make the delicacy “Jhaal” to celebrate Rasogolla given ‘Geographical Identification’ (GI) status as “Banglar Rasogolla” in November last year overruling Odisha’s claim.

Jayanti Pal Choudhuri, a homemaker who tasted Somnath’s chilli Rasogolla today said: “The taste is absolutely different. It is  jhaal and mishti (hot and sweet) at the same time. The flavor of green chilli made it fascinating”.

Today his innovative delicacy grabbed the attention of the foodies.  His entire production brought to the festival was sold out barely within two hours.

Somnath, who runs a confectioner simultaneously with a hotel in Ranaghat town said: “I was little shaky to introduce this new delicacy. I earlier tried few numbers only to get testers’ feedback. The response was lukewarm. Nevertheless, I decided bring little change to the traditional taste of Rasogolla, by making it little tangy. I just kept in mind that most people at some points like the tanginess of hot and sour. So I just had done it for a change. Today, I am overjoyed witnessing the reaction among the people”.

“I, however, followed the conventional way of making, which can never be passé. I just tried to change the way we often see our favorite delicacy”, Somnath added. In this endeavor, with downright whacky delicacy like chilli rasogolla, Somnath has even developed ‘Tulasi Rasogolla’, made with mixture of tulasi leave and chhana, which he claims has medicinal value due to goodness of the herb.

Ranaghat Municipality chairman Parthasarathi Chatterjee has termed Somnath’s endeavor as “reinvention” of taste. “With such experience Somnath actually reinventing the taste of Bengali desert without changing its original character”.

Chatterjee, appeared to be elated with such innovating ideas displayed at the Rasogolla festival, which he organized to celebrate the Bengal’s win over Odisha on Rasogolla’s GI tag. Over 100 confectioners from Nadia took part in the festival.