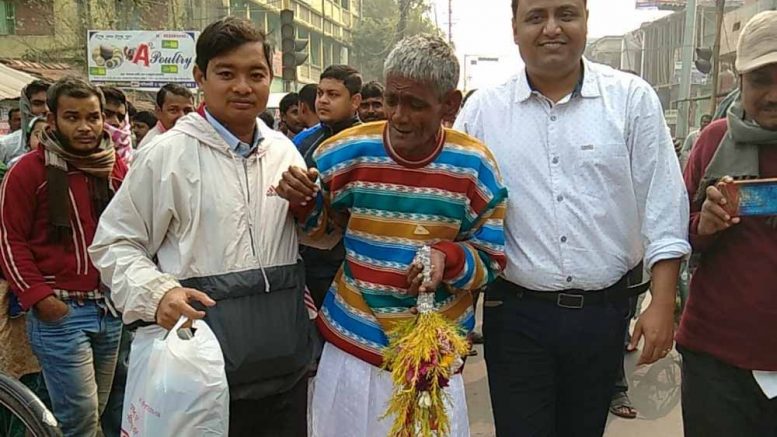 An elderly vagrant before cleaning and provided with new attire

Santipur, Jan. 14: Policemen attached to Santipur police station with support of some local youths have launched a noble initiative  to protect the mentally unstable vagrants from the chilling spell of cold.

While icy winds walloped most areas in the state intensifying the prevailing cold conditions dropping the mercury level as low as around 8 degree Celsius with met office forecast continuation of similar conditions for the next few days, the cops attached to Santipur police station picking up the vagrants from the road and trying their best to protect them. They have not just given them winter garments and blanket, rather bought them new cot and covered their usual stay with tarpaulin sheet in a bid to protect them from cold.

As a part of this endeavor, which was launched on January 7, they have been cleaning the vagrants, trimming their hair, shaving beards, and giving them a hot water bath before giving him new attire as well as winter garments. They are also arranging their regular food and providing cots to sleep in a vacant place in a market place covering it with the tarpaulin so that they remain protected from cold during night in particular.

The police have also arranged for doctors to examine these vagrants, so that they may be administered medicine, if required, which would be fed with the help of civic volunteers. The Police have urged local people to join the initiative for sake of these mentally unstable persons. Responding to the appeal, some temples offered to give them meal from their daily ‘bhog’. A priest of Bara Gosain temple said: “This is a great initiative. We would send the Prasad as food for such persons”

“People have been reeling under cold wave. In such situation we have taken an initiative so that these homeless mentally unstable elderly persons do not die in winter”, said Santipur OC Raja Sarkar, the brain behind the endeavor.

An elderly vagrant in Chutorpara before cleaning

Today Sarkar personally joined hands with youth like Biswajit Roy and with soap, shampoo; disinfectant lotion to clean an elderly person in “Daak Ghar More” is of the town. He rubbed his skin with the soap before giving a hot water bath and then donned him new attire.

Sarkar said: “During every winter I found many individuals and organizations distribute winter garments and blankets among homeless and mentally unstable vagrants. But, they avoid touching them due to their soiled and sullied look and attire. I felt that the noble gesture lose its significance this way. In Santipur night vigilance I found many mentally unstable persons shivering in cold on the street in chilled winter nights. I also had though to give them winter garments. But, then I decided to clean them and to provide little more comforts”

“I discussed the matter with some enterprising youths like Biswajit Roy and his friends, who also come up to join the initiative. I also appealed local traders. They had first chosen an old man who roams in Chutorpara bazaar. I was little apprehensive about how he would react. We cleaned him in last week and given him new attire. Fortunately he responded well to our gesture”, added Sarkar.

An vagrant after cleaning

“Today we cleaned another person, a mentally unstable vagrant. After cleaning we given him new attire. Prepared his bed on a new cot with blankets and given him lunch. He responded well”, said Biswajit Roy.

OC Raja Sarkar said: “This is a beginning. We will find more such persons and try our best to protect them from cold. Success of the initiative depends on how these mentally unstable persons react. At the same time we would gradually try to send them to mental asylums”.