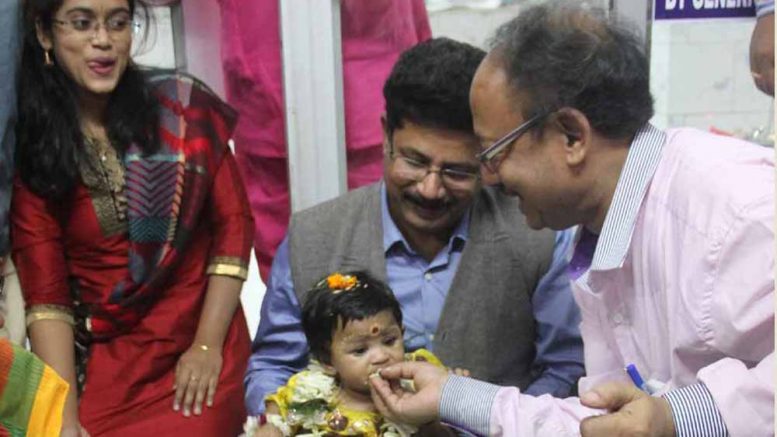 Jhulan on the lap of Hospital superintendent Dr.SN Sarkar while Pediatric AK Bera feeding her rice

Krishnanagar, Dec. 1: A four months old female child born to an abandoned and mentally unstable woman, who was being raised by the staff and nurses attached to the sick newborn care unit (SNCU) of Krishnanagar Sadar Hospital was given her first rice today – an annaprashan in a formal way.

Realizing that the mother of the child would not be able to raise her, the hospital authority kept the child at the SNCU since she was born on July 11this year.

As the child named as “Jhulan” by nurses, is set to get a new home as she would soon be shifted to a home in the town, staff and nurses, who developed a bond with the baby, went through the tradition in a formal way organizing the ceremony.

Superintendant of the hospital Sachindra Nath Sarkar today sat on the floor inside a room at the hospital and took the baby on his lap when pediatric Ashim Kanti Bera feed her first spoonful of rice.

“It is a great experience. A developed with the baby has developed today for ever. But, at the same time all of us have to leave her for home.” said the superintendent.

“We have written a letter to child welfare committee chairman to take care of the child as her mother is mentally unstable and not fit to brought up the baby”, said superintendant Sarkar.

However, CWC chairman Rina Mukherjee said: “We will take up the baby only after the hospital authority produce a detailed medical report prepared by a medical board confirming that the child’s mother is mentally unstable”

On July 11 this year a social organization in Krishnanagar admitted a mentally unstable and abandoned women, finding her on the crying in labor pain lying on the road. On the same day, she delivered “Jhulan”. The woman, unaware of her newborn, later shifted to Saktinagar district hospital, where she was admitted to the psychiatric unit.

“It is a great experience. A developed with the baby has developed today for ever. But, at the same time all of us have to leave her for home.” – Dr. SN Sarkar

“The baby was weighed 2.6kg and there was no abnormality in her apparently”, said pediatric Ashim Kanti Bera, who regularly examines her in SNCU.

Chief medical officer of health Nadia Tapas Roy, who was also present at the occasion today said: “Even though the baby was quite fit, we decided to keep her in the SNCU so that she gets proper care”.

Today the nurses draped Jhulan was with a new dress, put traditional sandalwood spots on her foreheads. The nurses themselves cooked a meal of rice, dal, fish curry, payesh for her.

Tmashree Chakraborty, a nurse said: “It would be quite difficult for us to stay here without her”