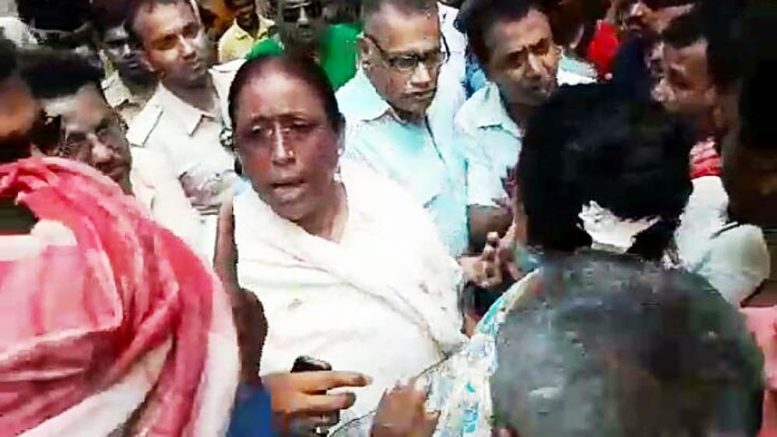 The angry party workers refused to join the campaigning of party candidate Rupali Biswas and involved into a spat with Sankar Singh when he arrived at the spot and advised to resolve the issue later.

However, it was Rikta Kundu, who first felt the hit of the angry party workers when she arrived in Phulia Township to persuade the party workers to join campaigning. But, she was kept gheraoed. Sankar Singh apparently came to rescue Rikta, but gheraoed.

The gherao was withdrawn at about 11.30am, when the two leaders assured action against Subhankar. The assaulted party workers later lodged specific complaints at Santipur police station. However, none was arrested so far.

Local sources said, trouble broke out last night when some party workers backed by anchal committee president Ranjan Bose and panchayat member Buddhuswar Kalyan were putting pillars on village road to prevent plying of heavily loaded trucks with building materials so as to save the road being damaged. Accused youth wing leaders Subhankar called the duo over phone and to come to Jubashree More. But, when they arrived on a motorcycle, around one hundred miscreants led by Subhankar armed with firearms started beating them..

Anchal committee president Ranjan Bose said, “Subhankar was leading the miscreants who attacked me and Buddhiswar Kalyan. I tried to escape when the miscreants chased me brandishing a pistol threatening me to kill….. “.

Panchayat member Buddhiswar said, “This is not the first occasion Subhankar attacked party workers. We are attached to party since 1998  but never were threatened in such way even during left regime”.

“In panchayat election Subhankar put dummy candidates in wall seats in this area and threatened party workers, nevertheless, party never dared to take action against him because he has proximity to a very influential state leader”, Ranjan added.

Zilla sabhadhipati Rikta Kundu said, “The party workers have genuine reason behind their anger. I have reasons to believe if this youth wing leader actually strengthening the hands of opposition or not”.

Sankar Sing said, “I have appealed the party workers to forget the incident temporarily for greater interest and to join campaign to ensure win of party candidate else it will convey a bad message”.

Accused Subhankar, however, denied allegations. “I was not at all present during the incident..It is an attempt to malign my image by a section of the party”.