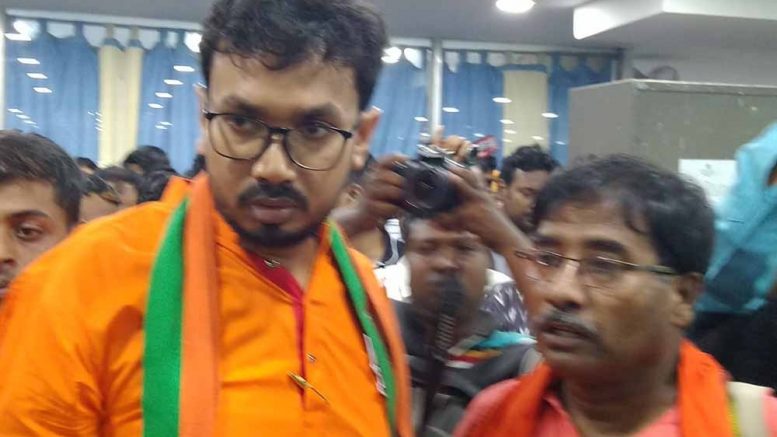 Krishnanagar, April 10: Causing a major embarrassment to the state BJP leadership, nomination of its Ranaghat candidate Mukut Mani Adhikari was rejected on Wednesday since he failed to submit the mandatory government order relieving him of his duties as a doctor of a state run hospital. The rejection of his nomination in other terms paved way for party’s Nadia North Unit president Jagannath Sarkar as his replacement to fight April 29 poll battle in Ranaghat.

A dejected Adhikari in a Facebook post has announced rejection of his nomination and vowed to remain with the party.

Party insiders feel that rejection of Adhikari’s nomination, who was party’s Matua face, would cost a major chunk of the community’s support base. A resident of Majhdia,  Adhikari, who is a contractual doctor with Badkulla Primary Health Centre was announced by BJP as its party nominee for Ranaghat on March 21. On the next day he submitted his resignation to Chief Medical Officer (Health) of Nadia seeking release order from government duties. But, on April 2, Commissioner of state health department rejected his appeal for resignation through a communication on the ground that he did not complete five years continued service as per the agreement. Adhikari appealed for a review of the order citing that the clauses of West Bengal Service Rule which the Commissioner quoted to dismiss his appeal for resignation is not applicable to the contractual doctors like him.

But, after much dilly dally coupled with an apparent unprofessional handling of the case that killed precious time, the state BJP leadership took the battle for Adhikari to the State Administrative Tribunal seeking to quash Commissioner’s order while submitting the nomination with the hope to obtain a release order before the stipulated deadline of scrutiny is expired on Wednesday.

However, the State Administrative Tribunal refused to accord any instant order without a hearing of the state government’s submission, which eventually put an end to Adkhikari’s endeavor to enter the poll battle.

The poor handling of the issue has meanwhile, a major resentment among a large section of followers of Mukut Mani Adhikai in Krishnaganj area. A section of the party workers think that with Adhikari’s rejection, the BJP would no more be able to use his influence among the Matua community, which forms about 40% of the electorate that apparently created serious concern among the Trinamul Congress leadership. “The battle now becomes easier to fight for Trinamul candidate Rupali Biswas”, a BJP worker in Ranaghat said.

Speaking to reporters at Ranaghat party office on Wednesday evening being the new party nominee for Ranaghat, Jagannath Sarkar said, “I still believe that Mukut Mani is party’s actual candidate. I will fight the poll as his replacement on technical ground.  The state government being afraid of Mukut Mani’s nomination from Ranaghat hatched a conspiracy so that he could not fight the poll. But, voters in Ranaghat will give a befitting reply to this heinous conspiracy”.

The party’s Nadia observer Sanjay Singh said, “We asked Jagannath Sarkar to submit nomination as an alternative candidate in case Adhikari’s nomination was not accepted. We tried our best, but we failed to get Mukut Mani in the fray due to conspiracy of the state government”.