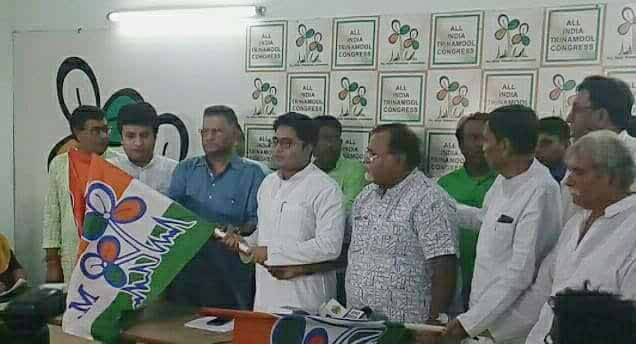 Departure of two more MLA came today came as jolt to Congress as its strength was reduced to 36 from 41. Soon after joining to Trinamul Congress today, Sankar Singh was declared as the working president of the party’s Nadia district unit.

Speaking about joining of the two Congress MLAs, Trinamul congress leader Abhishek Bandopadhyay said: “Trinamul Congress will be benefitted and strengthened further with joining of experienced leaders like Sankar Sing and Arindam Bhattacharjee”.

A large number followers of Sankar Singh and Arindam Bhattacharjee were also present today at the party office in Kolkata.

Congress workers in the district, however, strongly reacted against their joining to Trinamul. In Santipur irate party workers slapped anonymous posters in the town questioning honesty of MLA Arindam Bhattacharjee’s. Speaking about changing his political loyality Sankar Singh refused to speak elaborately. He said: “I joined only to extend my support to Mamata Banerjee in her fight against communalism”.

Party insiders, however, indicated that Sankar’s soured relationship with party Bengal president Adhir Choudhury actually responsible for his decision to leave party. “It became tough for Sankar da to digest humiliation in the hands of Adhir Choudhury and some of his loyalists in the district”.

Meanwhile, Adhir Choudhury while attending an iftaar mazlish in Krishnanagar lashed out on Sankar for his decision to join Trinamul Congress.

“Sankar Singh joined Trinamul Congress only to satisfy his personal interest. He was lured by Trinamul and was not in touch with Congress since past few months. He cheated with sentiment of Congress workers, who elected him and loved sincerely over the years for his leadership quality and dedication. Sankar da would soon understand the mistake he has committed today and the respect he lost for ever”, Adhir Choudhury added.