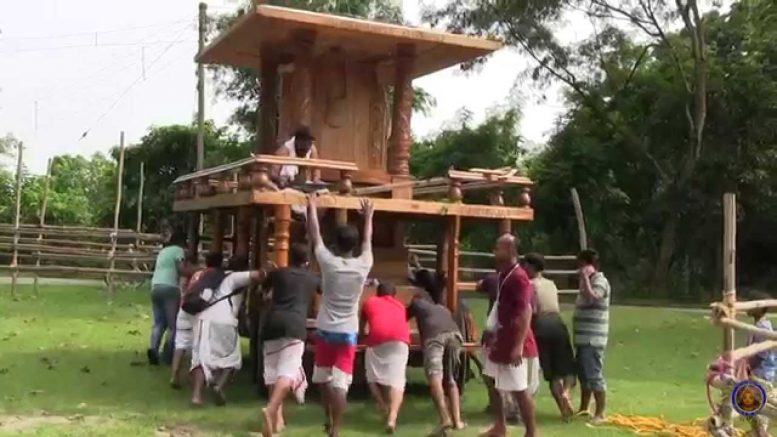 Mayapur , June 22: In an attempt to draw more devotees to the Rath Yatra festival this year, the Iskcon authorities in Mayapur, would introduce “Tulavarnam” service for the first time in which the devotees and guests will be allowed to offer puja items likes ghee, fruits, jaggery equal to their body weight before the Lord Jagannath.

The service which is commonly practiced in temples located in Southern India, is set to be introduced this year as an added attraction for the devotees.

The Iskcon authorities believe that this would encourage more devotees to join the festival which will begin from June 25 and continue for next 9-days..

Every year during the Lord Jagannath’s stay in Gundicha, devotees bring many gifts for him like gorgeous dress, turban, garlands and food delicacies like pizzas, ice cream, cakes, sweets But this year the “Tulavarnam” is going to be a new attraction.

As per the tradition, on June 25 afternoon, the deities of Lord Jagannath, Baladev and Subhadra will be seated on  three different chariots and taken out in a grand procession from the ISKCON’s Jagannath temple in Rajapur to Chandradaya temple at Mayapur, where the devotees will offer their puja and prayers. The Lord Jagannath at Iskcon

The most unique feature of Rath Yatra festival in Mayapur is that it becomes a symbol of equality and integration as people from various communities enthusiastically participate in it.  For years it has been a practice in Mayapur that the people leaving their social, religious and economic prejudices and barriers turn up in large numbers to get a ‘Darshan’ of Lord Jagannath.

The preparations for the festival began on the day of Akshay Trithiya. This year too since Akshay Trithiya more than 100 devotees have been toiling round the clock to prepare the chariots and to make other arrangements.

The festival will begin from the wee hours of June 25 morning.

The procession of Lord Jagannath’s will start from Rajapur at 2pm. It will pass through  Chand Kazi’ burial monument, Bamanpukur market, Balaldighi on Bhakti Sidhhanta Saraswati Road, covering a distance of 6km.  The procession will feature congregational chanting (sankirtan) , dance,   musical performances by the devotees. Further, accompanying the chariots devotees will play drums, tambourines, trumpets, cymbals .  On way, the deities will be showered with flowers and offered fruits, sweets like “payash” “khaja” and other delicacies.

Jagadhartia Das, Public Relations coordinator said: “We expect that this year more than one lakh devotees will attend the festival. For smooth running of the festival and to take care of the devotees we have made elaborate arrangements by installing numerous booths on the way which will be render help in case of any emergency”.

“For the first time a magnificent Gundicha Temple has been constructed at Prabhupad ghat along the river Ganga  and the deities will be kept  there till the Ulta Rath Yatra (Return Chariot), to be held on July 3. During this period cultural programmes will be organised for the pleasure of  Lord Jagannath”, Das added.