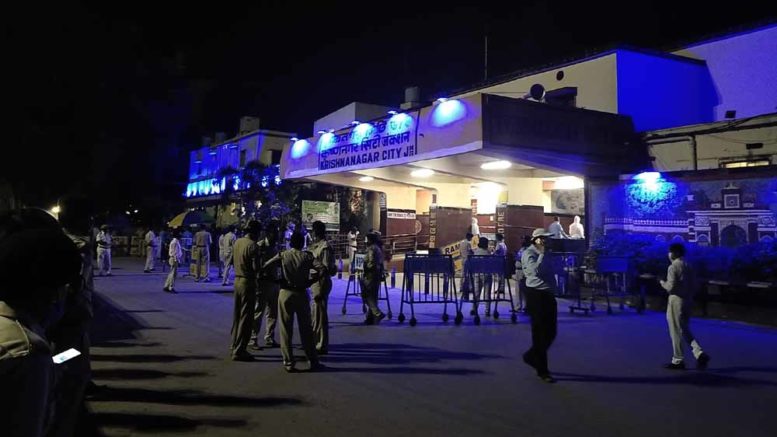 Krishnanagar, May 18: A Shramik Special train carrying 1123 stranded migrant labouers and tourists from Uttarakhand’s Haridwar arrived in Krishnagar junction railway station on Monday evening amidst tight security arrangement. The train had 1188 enlisted passengers, but some of them eventually did not boarded the train. The train left Haridwar at 4.45 PM on Sunday reached the Krishnanagar junction railway station at about 7.30 pm, where the passengers were alighted. A large contingent of RPF, state police had cordoned off the railway station premises prohibiting entry of the commoners as a precautionary measure to avoid outbreak of Covid.

Since the train was specially arranged by the Bengal government, passengers were transported free of cost.

Nadia has, however, only 8 migrant labouers who return home travelling the train.

Alipurduar has 336 labouers, the highest, followed by Hooghly with 112 passengers who return by the train. They later boarded NBSTC buses to return home.

The labours were given a grand reception by the Nadia district administration on behalf of the State Government.

Nadia District Magistrate Vibhu Goel said, “As a token gesture to make their homecoming a memorable event for which they have been toiling hard for about past two months, we have welcomed them with flowers and sweets. They were also medically screened and put on designated buses to take them back home.” On May 16, Union Railways Minister Piyush Goyal said that centre is ready to run Shramik Special trains from any district and told the District Magistrates to prepare list of migrant labourers who are trapped in different places due to the lockdown for Covid situation.

At least three more such trains would arrive in Krishnanagar carrying migrant labouers from three towns of Kerala during the next two weeks, Goel told the reporters.

Questions, however, rose as why passengers of remote North Bengal districts like Coochbehar, Alipurduar, Kurseong as well as Purulia, Paschim and Purba Burdwan were brought to Krishnanagar.

A passenger from Purulia said, “We are thankful to centre and the state government. They have done a lot to help us to ensure a good journey. But, they could avoid us brining to Krishnagar which is far away from home. We have to travel overnight again by bus to reach home”.