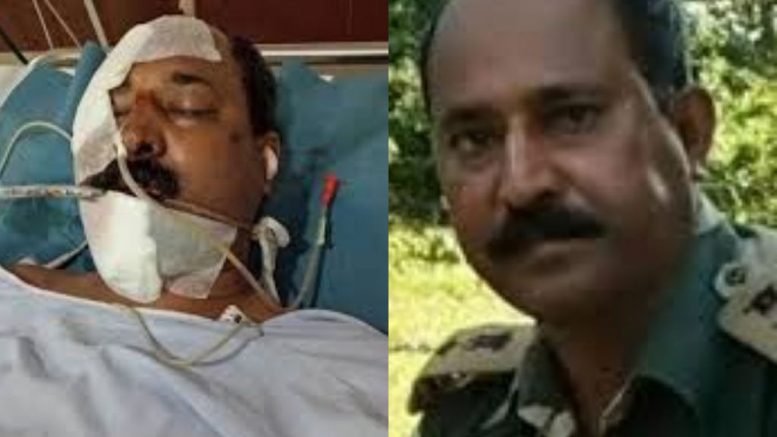 Taraknagar (Nadia), Oct. 21: Body of BSF’s slain officiating commandant Deepak Kumar Mandal today buried at his home turf in Nadia’s Taraknagar-Dakshinpara village after it arrived there from Kolkata based Medica Super Specialty Hospital where he died on Friday after fighting for life for over 72 hours being injured in an attack by the suspected cattle smugglers in Tripura on last Monday. Members of the deceased officer today categorically alleged he was killed in a well planned conspiracy and demanded an independent probe into the incident.

Today the last rites of the killed officer were done by his two minor sons Dipanshu and Debanjan, students of Class 9 and 5 respectively, following the Vaishnab way as per the family tradition.

“I am surprised that how an officer of the rank of assistant commandant could be attacked such a way who always roamed with at least two armed body guards. Where were his body guards when he was attacked?  I suspect that it a well planned conspiracy to kill him” – Uttam Mandal, slain officer’s brother

The body was buried after the BSF personnel who escorted the body from Kolkata paid their tribute to their slain colleague through a gun salute. His two sisters also marked his forehead with chandan tilak for the last time on “Bhai Phonta”. A pall of gloom descended at the Taraknagar Dakshinpara village where a large number of local villagers gathered to pay their last respect. A large BSF team was also present at the home of the deceased officer. However, most surprisingly no officer or representative from the district police and general administration were visible at his home. The Hanshkhali police washed off its duties by sending five civic volunteers to manage the crowd.

A team of Hindu Jagaran Manch was also present at the village and paid their tribute to the slain Officer.

Today Mandal’s two sisters and two brothers and his wife Sudeshna Mondal, have demanded an independent inquiry into the alleged attack that took Mandal’s life.

On the wee hours of October 16, suspected cattle smugglers attacked Mandal, who was second in command of 145 battalion, in Sipahijala district of Tripura. He was hacked first and then mowed by a vehicle. He was rescued in a critical condition and later air-evacuated to Kolkata where he died on Friday.

His brother Uttam Mandal said: “I am surprised that how an officer of the rank of assistant commandant could be attacked such a way who always roamed with at least two armed body guards. Where were his body guards when he was attacked? How the other personnel travelling with him escaped unhurt? These remained mystery to me.  I suspect that it was a well planned conspiracy to kill him”.

“We came to know that he earned wrath of the local cattle smugglers as he stopped their trade being very vigilant. There is a large stretch in the area which is unfenced and became the gateway of smuggling. But, Dada stopped it. This might have played havoc. We also suspect involvement of a section of BSF personnel posted in the stretch who might have a nexus with the cattle smugglers”, he added further.

The BSF officers who escorted the body today in Nadia, however, refuted the apprehension. An officer said: “Mandal was attacked by a group of about 25 suspected smugglers at about 2am on October 15 night when he was returning in a car after visiting an accident spot. He chased the gang seeing them smuggling cattle. But, the gang was big enough. They were armed and overpowered Mandal and his men”.