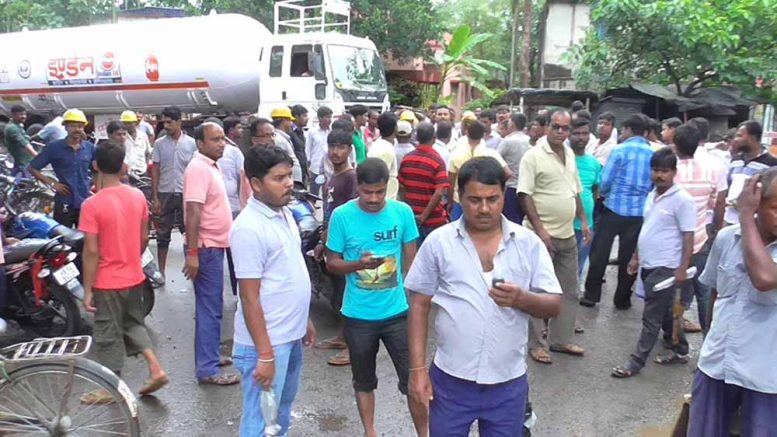 Kalyani, Oct. 20: Dispatching of Liquid Petroleum Gas (LPG) cylinders from the Kalyani based bottling plant of Indian Oil Corporation was affected since Friday morning as the track drivers of the carriage agencies have stopped works for indefinite period demanding immediate payment of arrears wages which are due for last two years.

Around 300 drivers of 16 agencies today gathered at the plant located at B block of Kalyani town and staged demonstration accusing the agencies for non payment of their dues arrears and refused to load their vehicles until their due wages are cleared.

These drivers are responsible to deliver the bottled LPG cylinders to the distributors from the Kalyani based bottling plant. For such delivery Indian Oil outsourced carriage contractors who engaged these drivers.

The Indian Oil Corporation brings LPG from Haldia in tankers and bottles the gas in its Kalyani plant to cater the requirement ofNorth Calcutta, North 24Parganas, Nadia and Murshidabad district. The plant has daily bottling capacity 50704 cylinders.

The drivers today alleged that the agencies are yet to clear the arrears of 24months since their wages were increased.

“The IOC has nothing to do on the issue. We have requested both to settle differences and restore normalcy” – IOC Official

Badal Chandra Adhikary, a driver said: “At present we are paid Rs.637 for each trip as per enhanced rate. The agencies are paying us the enhanced rate. But, as the new wage came into effect and payable since 2105, the agencies are yet to clear the arrear of the balance amount at the rate Rs.160 per month”.

Ramen Charan Mahato, another driver said: “The agencies on repeated occasions failed to pay the dues despite repeated assurances. Lastly they assured us to clear the dues by October 16. But nothing was paid on that day. Finding no way today we have stopped working”.

Some of the officials of the carriage agencies present at the plant today to persuade the drivers, refused to talk to media today. However, a Burdwan based carriage contractor, however, claimed: “The drivers have been paid in full. Nothing is due. A section of the drivers has been trying to disrupt services for their personal interest”.

An officer of Indian Oil in Kalyani said: “The IOC has nothing to do on the issue. We have requested both to settle differences and restore normalcy”.

Trinamul’s labour wing leader in Kalyani Sushil Tarafdar said: “I have told the drivers to resume work without hampering services. Talks can be arranged to settle the problems”.