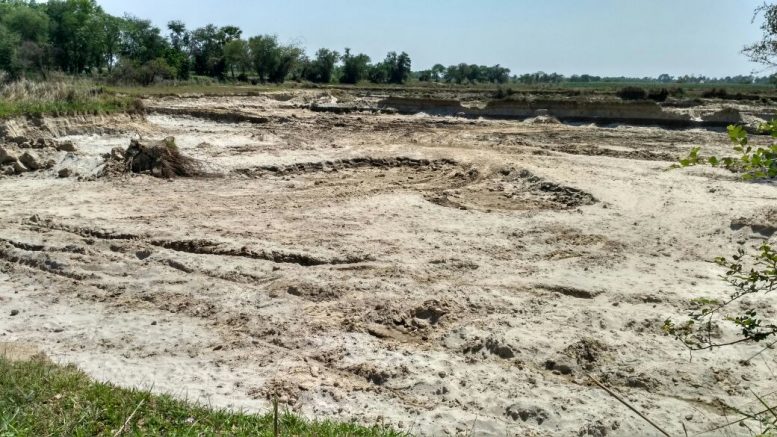 Nabadweep, March 17: A government owned land earmarked for construction of an Industrial Training Institute in Nadia’s Nabadweep has been severely damaged due to random removal of earth by the miscreants who supply soil to different brick kilns in the area.

As the removing of earth going unabated for over past few months despite local residents tried to put a resistance, a major part of the 3-acre land, has turned into a pond with land and land reforms department appeared to be little bother to lodge police complaint against offenders despite local Trinamul MLA Pundarikakshya Saha advised them for the same.

Nabadweep police responding to calls by local farmers conducted raids in few occasion in recent past and arrested some miscreants involved in removing of earth, but eventually they got bail from the court in absence of any strong complaint by the land department.

MLA Pundarikakshya Saha said: “It is quite shocking that a government land for a noble project has been damaged in such a way. I apprehend it would be quite difficult to take up construction work on the land. I have told the BL&LRO to lodge police complaint against the offenders. I will also talk to the district administration so that the land is not further damaged as the project would be coming up soon on the land”

“I have sought a report from the Nabadweep BL&LRO. Action against the offenders will be taken soon. Land for government project cannot be allowed to be damaged in any way” – Abhijit Bhattacharjee, ADM (L&LR)

In April 2015, chief minister Mamata Banerjee during a public meeting held in Nabadweep town announced construction of an ITI at the Forest-danga village under Majhdia-Pansila panchayat. 3acre land was identified for the project opposite to proposed to the land for Sanskrit Research Centre, which was also announced by the chief minister. The project, however, delayed due to non allocation of fund. According local sources, removing of earth began from December last year by miscreants. “The miscreants who have support of a section of Trinamul leadership and that of some officials of BL&LR office had cared little our resistance. They have been supplying the earth to the brick kilns in Nadia and East Burdwan. They threatened us of dire consequence if we raise voice. They engaged heavy machineries so that earth could be removed fast”, said a local. “We on a number of occasions appraised the land office in Nabadweep to save the land as the random removing of earth would in other way would make it low-lying and flood prone being located close to Bhagirathi river embankment. But, they did nothing”, alleged local resident Dilip Mahato.

“In a major part of the land earth has been removed cutting it deep by over 8ft giving it a look of pond”, he added.

Nadia’s additional district magistrate (L & LR) Abhijit Bhattacharjee said, “I have sought a report from the Nabadweep BL&LRO. Action against the offenders will be taken soon. Land for government project cannot be allowed to be damaged in any way”.