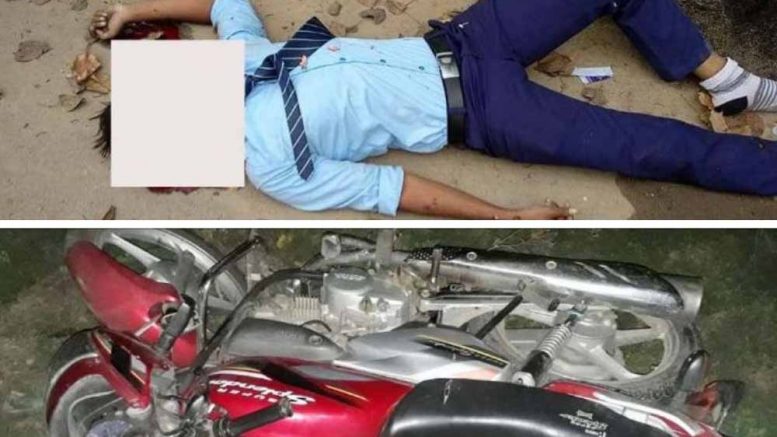 Subhranil lying dead on road and the bike he was riding

Santipur, March 17: Craze for an ambitious picture while riding a motorcycle claimed life of a second year polytechnic student in Nadia’s Santipur on Friday evening.

Subhranil De (19), a mechanical engineering student at Hooghly’s Saroj Mohan Institute of Technology   (SMIT), died on Guptipara ghat road as he lost control of his motorcycle and rammed on to the brick wall of a temple in high speed while having a glance to the video his friend was filming on his mobile in “Killfie” mode sitting on the pillion.

“Killfie” is picturing self image in life threatening situation, which is a new trend that has gained popularity among teens and young all around the world. But, eventually in most cases they put their lives at risk. The deceased, a resident of Moshkalitala in Santipur town who was actually riding his friend’s motorbike without helmet, died on the spot.  He was taken to Santipur state general hospital where he was declared brought dead.

The deceased student was the only son of a private company employee.

His friend Bapon Sarkar, owner of the motorbike, who was seated on the pillion wearing a helmet, was injured and admitted to Santipur state general hospital. He got his collar bone and hand fractured in the accident.

The accident occurred when the two teens were returning home from after appearing in an examination at their college.

The bizarre truth about the ‘Killfie” ride was revealed later in the evening when the family members found the smart phone of the deceased and the last recorded video.

A family member said: “We initially heard that the motorbike was skidded at a turn. But, the mobile phone tells a different story. The last video contains the image of the last ride in high speed taken presumably by Subhranil’s friend Bapon riding on the back. But, when we asked him at the hospital, he denied it”.

“The ambitious craze to see own image and to share it to social media has made young men and women dangerously careless. They care little about falling off cliffs or being hit by trains. They have a peculiar mental state” – A Psychologist

Family sources said in the video Subhranil appeared to be concerned about his look while motorcycling.

Eye witness on Guptipara ghat road also claimed that they seen a teen filming the ride sitting on the back.

The bizarre end came today when Subhranil, who was a learner, riding the bike asking his friend Bapon to film his image in selfie mode so that he could show it to friend.

Family sources said the deceased teen used to go to college riding motorcycle of his friends. They used to cross the river Hooghly along with motorcycle on boat and reach college in Hooghly.