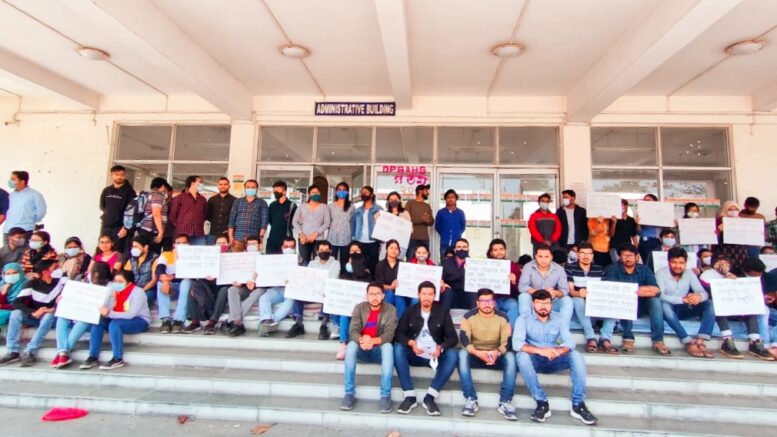 Junior Doctors and Students staging demonstration at the administrative building at College of Medicine & JNM Hospital campus in Kalyani on Sunday.

Kalyani, Feb. 13: The stalemate at the College of Medicine & JNM Hospital in Kalyani continues as the over 250 junior doctors, interns, as well as four batches of MBBS students decided to go on with their indefinite demonstration demanding adequate security arrangements inside their academic campus in the wake spate of miscreants’ activities.

The decision to continue the demonstration which they began on Saturday following miscreants vandalised an auditorium, was taken after a talk with a team of officials of the West Bengal University of Health Sciences, held at the campus, failed.

A team of six officials of the WBUHS visited the campus and talked to the agitating students, but they apparently failed to offer any solution that eventually led the students to continue with their demonstration. Salman Halder, a final year MBBS student, and students’ union secretary said, “We categorically demanded to ensure security measures inside the hospital and at the academic campus that includes our hostel. The entire premise remained unguarded in absence of any closed gate. Moreover, we demanded installations of CC cameras and reiterated our longstanding demand of setting up a police outpost to ensure proper surveillance in the vast campus. The officials had given us a patient hearing, but failed to give any assurance or decision”.

“The meeting turned out to be a useless one. We expected that the Registrar would come and meet us. But, unfortunately, he did not bother to meet us. So we have decided to continue with the agitation. We will wait for a few more days while continuing the demonstration and suspend all services at the hospital and also suspend classes unless the problems are resolved”, the student union leader said.

The students also demanded that repair and maintenance work of the vandalized auditorium must be completed within one month since it is largely used for academic purposes. The officials, however, failed to make any assurance.

The officials refused to talk to the media persons. However, a member of the team on anonymity said, “We visited the campus to see the situation. We understand that the demands of the students are quite genuine. But, we can’t offer any instant solution. We told the students that their demands and grievances would be conveyed to the higher authorities for a solution, but they appeared unconvinced”.

The students alleged that every time a security threat occurs the officials offer only verbal assurance. “But this time we will not be convinced with such dry assurance”, an agitating student said.

Medical Superintendent Avijit Mukherjee said, “I have already appraised the higher authorities about the demands of the students, which are quite genuine. A team of officials today met students and interacted with them for a solution”.

Earlier on Friday night unidentified miscreants sneaked inside the Kalyani-based College of Medicine & JNM Hospital’s academic campus and ransacked an advanced auditorium, damaged its ceiling, acoustic system, and vandalized adjacent washrooms as well as cut off cables despite round-the-clock surveillance by three security agencies at the sprawling premises.