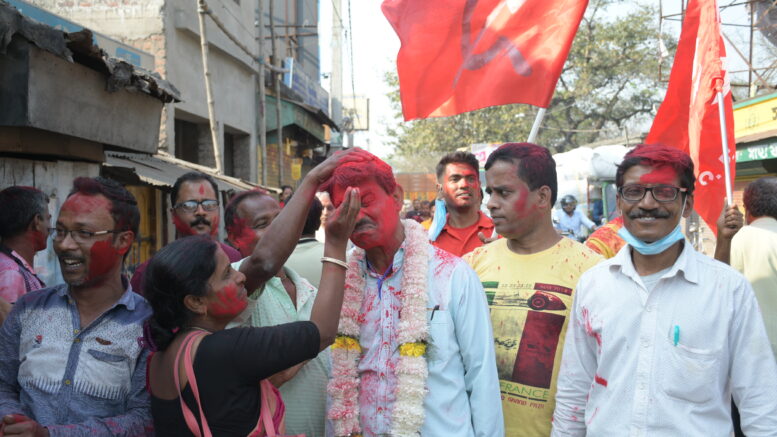 Ranaghat/Taherpur, March 2: On a day the state witnessed a landslide victory of the Trinamul Congress in the Municipal polls, the residents of Taherpur town put a blot on the success story of the ruling party.

People in this small town of Nadia supported the CPM to retain power in the 13-member civic body by defeating the Trinamul Congress. The CPM, which bagged 8 seats, attributed the success to its ‘Taherpur model’ of people’s resistance against looting of votes by miscreants that the party made possible by regimenting people despite it lost in the town in last year’s assembly poll.

The CPM’s Taherpur leadership was successful in making people believe that their right to cast votes cannot be robbed by anybody.  To prevent looting of votes and booth capturing, the party formed booth-level independent resistance groups consisting of about 150 party supporters, who literally thwarted several alleged looting bids of votes by miscreants on February 27.

The regimentation was so strong that in Ward 4 party worker Bishnu Guha, 41, prevented booth capturing despite being attacked with sharp weapons by miscreants and eventually given 18 stitches, a party leader said. “We managed to thwart looting bids in at least 11 wards. In 2 wards we failed and lost this include Ward-11 where our outgoing chairman Ratan Ranjan Roy lost”, the leader added. “Last year’s assembly poll was an eye-opener to us. We lost to Trinamul in the town as miscreants prevented people from coming to polling booths. We knew that the Trinamul would this time directly desist people to vote and capture booths exploiting the silent support of state police. So we conceived a plan for regimentation so that looting of votes can be prevented”, said Supratip Roy, CPM’s Taherpur area committee secretary.

“It is true that a predominant support base of working-class people which formed a large part of the population helped us for the regimentation, but at the same time a step-motherly attitude of the Trinamul led government that deprived people of their rights to the basic amenities reflected in the EVMs “, Roy added claiming that ‘Taherpur’ ought to be a model in the state in the coming days.

“We have shown the way how to fight fearlessly against the miscreants and state machinery…” said Prasun Thakur, a winning CPM candidate of Ward-7,

The Taherpur town has had a legacy of left rule for a long. A migrated lot from East Pakistan which was rehabilitated in the town was provided unconditional land rights by the Left Front government. As a result, the population which belongs to the unorganized working class had a strong leaning towards CPM until the 2019 Lok Sabha poll, when it witnessed a rout amid a BJP wave. But in the last year’s assembly poll the CPM retained its support base largely among 18564 voters even though it trailed behind Trinamul in the town area by over 100 votes.

In 1993 the town declared a notified area and the first civic poll was held in 1995, which the left front won. In 2010 CPM lost board due to the defection of some councilors despite winning the poll. But CPM got control over the board again in 2015.

CPM’s Taherpur area committee secretary Supratip Roy said, “No support base can survive long unless the party serves. Being the party in power in the small town, we tried to service people despite non-cooperation by the state government even in the Covid situation.  Further, we made people aware to protect their votes. This has become very important now across the state. Unless people are regimented leaving their political difference, their democratic right rights will be repeatedly robbed by the lumpens of the ruling party”.

Trinamul’s Nadia south organizing committee chairman Bani Kumar Roy, however, refused to accept the result of resistance of people against looting of votes. “People voted as per their choice. We accept our defeat. Taherpur civic board was under left control and people once again chose them. In fact, people in Taherpur in other terms proved that the allegations of poll malpractices are baseless. There were also some organizational drawbacks and flaws as we failed to reach people despite they voted us in the assembly poll. We will rectify those issues”.