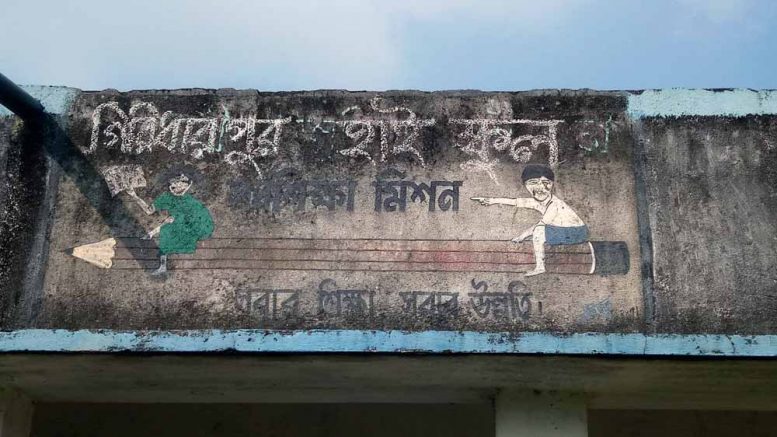 Nakashipara, Oct. 31: Some teachers of Giridharpur high school in Nadia’s Nakashipara have hired a Madhyamik passed youth, who runs a tailoring shop, for a monthly contract of Rupees 1500 to take classes on their behalf during their absence. With these arrangements, the teachers have been abstaining school often for indefinite period without leave application even signing the attendance register in advance.

An embarrassed district administration today found this amazing fact when an officer of Nakashipara block development office paid a sudden visit to the school responding to a complaint by the local villagers. Officials of district administration during inspecting inside the school

Shafiqul Sheikh, the youth under ‘contract’, who also runs a small tailoring shop in the village, today told media persons that he has been taking classes in this way for the last two years on regular basis. Nazira Khatun, a girl, who also passed Madhyamik examination, helps him regularly in the school.

The headmistress Rinku Banerjee said that in absence of teachers she was forced to take help of the former students. But, she refuted paying any money to them.

Shafiqul said: “Earlier I used to take classes free of cost. But, for the last three months I am being paid Rs.1500 grossly by the teachers for my service”

Today the joint BDO Bhabesh Chandra Mandal seized the attendance register and suspended the examination for indefinite period. He said: “Today I found no teacher at the school and an outsider taking examination. I also found that teachers like Ruma Biswas, Sipra Sarkar and Anwesh Samanta have signed attendance in advance up to December”

Nadia DM said: “Teachers will be show caused tomorrow and stern action would be taken against them on unsatisfactory reply”.

DI of school Mitali Dutta refused to reply any query of this correspondent as she claimed to be busy.

Giridharpur junior high school was found in 2010 in Joynagar village under Haranagar gram panchayat. In 2015 the school was upgraded to High school. The school offers education from class V to X. It has at present 404 students and only 4 teachers. Local villagers alleged that they seldom seen all the teachers present in the school. Sources said at present only the head teacher Rinku Banerjee generally attends school, but she remains busy with administrative works and does not take class regularly. Out of the other 3 teachers, Anwesha Samanta does not attends school as she is doing BEd course, Ruma Biswas is on maternity leave and Sipra Sarkar used to escape school due to illness of her son.

Ashikul Sheikh, a local villager said: “my daughter reads in the school, who returns almost every day by 1am after the midday meal is served. She told me hardly one class is regularly taken that too by Safiqul Sheikh, a tailor, clubbing three or four classes together”.

“The absence of the teachers became unbearable as they have been playing with the future of the students of this backward area. So today we called the BDO for a visit to the school”, he added.

“There is crisis of teachers. We have only 4 teachers for over 500 students which are quite inadequate. I made several appeals to the school education department, but none was posted. Moreover, the teachers used to abstain classes. Repeated requests failed draw any response from them. Finding no way, I took help of the tailor for voluntary service” – Rinku Banerjee , Teacher in Charge (School)