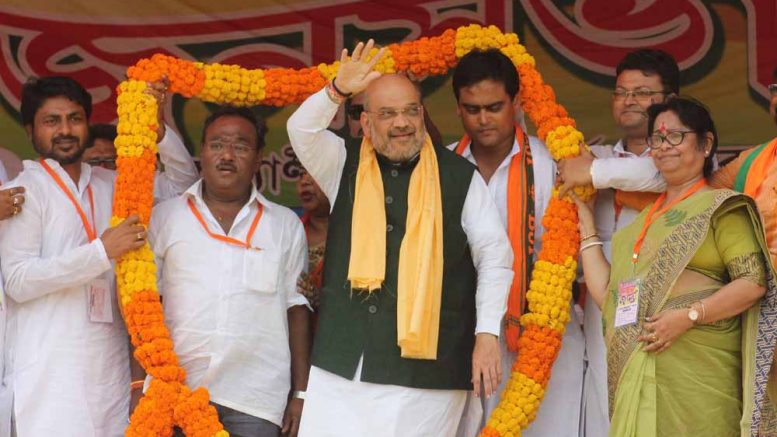 BJP President Amit Shah being welcomed with a garland at an election meeting in Kalyani on Wednesday. Picture by Abhi Ghosh

Kalyani, May 1: BJP National President Amit Shah said that the ongoing Lok Sabha election has become more significant in Bengal than the other parts of the country as it would play a decisive role in protecting the democracy and to end rule of violence which he alleged being promoted by Trinamul Congress.

Speaking at an election rally in Nadia’s Kalyani that falls under Matua dominated Bangaon constituency in support of party candidate Santanu Thakur, BJP National president Amit Shah on Wednesday said, “This election bears significance across the country for development of the poor, for ensuring security of the country, for development of infrastructure, for growth of economy…. But, at the same time, it is more significant in Bengal as it will decide whether democracy in Bengal will survive or not”. Accusing Trinamul Congress supremo Mamata Banerjee of indulging violent activities in the state, Shah in categorical words said, “The way Mamata Banerjee has allowed to the miscreants to unleash terror during the panchayat poll and throttled the democracy is unimaginable”.

Claiming that this election will end the rule of violence unleashed by Trinamul, Shah said that the people in Bengal would experience a ‘Parivartan’ this time.

“The results of the election which will be announced on May 23 will prove that people in Bengal have rejected Trinamul Congress as it has been destroying their culture”, Shah added.

“Trinamul has brought the culture of violence, the culture of bombs. The blasting sounds of bombs have weaken the sweet notes of Keertan and Rabindra Sangeet in the state”, Shah alleged.

In a thinly attended meeting, Shah also reiterated that the if return to power, it will give citizenship to the Matuas and all the eligible refugees of Hidhu, Buddhist, Sikh, Jain communities who took shelter in the country coming from neighboring countries.

Shah said, “There are many issues which the Bengal has been facing badly. We have in our manifesto proposed to settle such issues. The issue of citizenship is one such issue, which we would settle first”.

Speaking categorically clearing the party’s stand on the proposed Citizenship Amendment, which the opposition including Trinamul stalled in the parliament, Shah said, “We will introduce Citizenship Amendment first…This is one of the long pending issue, which the Matua community members have been demanding for long will be fulfilled with honor by Narendra Modi. You will be able to stay in India with pride. We will provide citizenship to all the refugees through this CAB and after that, listen carefully; we would introduce the National Registrar of Citizenship to flush out the infiltrators”.

“This is our commitment”, he added. “But, unfortunately Mamata Banerjee has been supporting the infiltrators because they have become her vote bank. But, we are only concerned about the security of the country and therefore, we will undertake the flushing out work of the infiltrators”, Shah said before flying to Howrah to speak in another election rally.