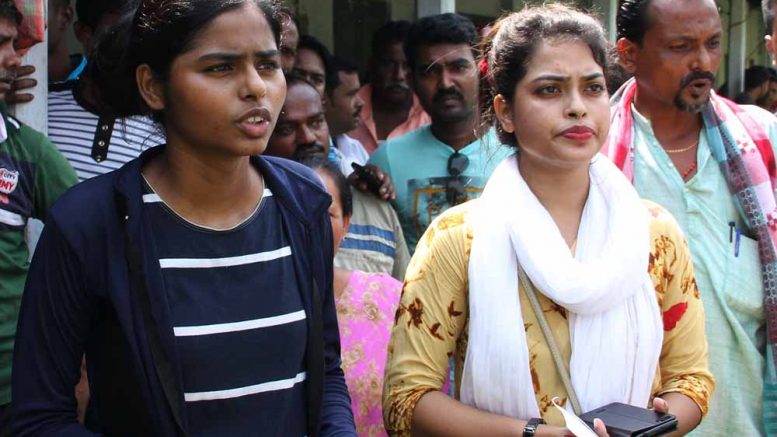 Barnali (left) with her cousin Mantu outside the polling booth on Monday. Picture by Abhi Ghosh

Gayeshpur, May 6:  A good number of young boys and girls exercised their democratic rights for the first time in their life in Nadia’s Gayeshpur on Monday despite they were allegedly prevented and severely beaten up by a section of Trinamul Congress activists for daring to come out to vote defying their instructions.

First time voters like HS examinee Barnali Saha, first year student Tiyasha Singh, Lokenath Das changed the usual polling day scenario in Gayeshpur town as they not just shown their resolve to cast their votes defying the attack rather inspired many voters, particularly the women in this small town to come out to vote ignoring the threat.

Even though for Barnali and the others, the first experience of voting turned bitter. Nevertheless, at the end of the day they appeared happy for having the indelible ink mark on their fingers.

“It is a long awaited day for me. I was eagerly waiting for the day since I was enrolled as a voter. But, I was surprised when some men and women stopped me on way to a polling booth and told to return home”, said Barnali, a student of Jonepur High School, who is waiting for the Higher secondary results.

Barnali, a resident of Subhashpally of Ward-18 in Gayeshpur Municipality which falls under Kalyani assembly segment of Bangaon lok sabha constituency, where polls were held on Monday. An outsider caught by Central Force

“But, I categorically told them that I am first time voter and I must cast my vote. But, this angered them. A woman from the crowd pulled me down to the earth dragging my hair and started kicking me. They also beaten up my cousins…But, I was so determined to cast my vote that I told them that even you kill me I will try best to go to polling booth. However, hearing trouble Trinamul’s Booth level president Ramesh uncle (Ramesh Das) rushed in and helped us to reach the polling booth”, Barnali added.

Trinamul leader Ramesh Das said, “As a Trinamul activist I am confident of a lead from my booths. So I told all to cast vote freely as per the political preference. But, some outsiders spoiled the mood here. But, local residents come up and forced them to leave the area”.

Same is the experience of Tiyasha Singh, a first year BA student of Kalyani College.

“I was going to the polling booth inside NVF camp when some women sitting under canopy with Trinamul symbols stopped me and asked my destination. When I told them I was going to cast my vote, they told me to go back. But, when I refused to oblige, they dragged me out of the Toto and started beating. They punched me on chest, hurled foul words at me. Some local people this time came told them to leave me”, Tiyasha, a resident of rail quarter para said.

Lokenath Das, a first year student of RBC College of Naihati was also prevented in similar way. However, he was daring enough to record the threat live on his mobile phone. “They stopped me but I started recording their threat. This angered them as they started beating me. But, I was determined to cast my vote…eventually they left the place threatening me for dire consequences later”.

Barnali said, “Since childhood I have been watching that people in Gayeshpur never allowed to vote. Particularly every ruling party worker used their clout to prevent voters out of fear of losing power. This time too it appeared to me as no exception. But, I was determined to face the challenge and to cast my vote”.

The proactive role by some Bengal Police officers like Biswajit Choudhuri, an Inspector who led central force’s quick response team (QRT) in Gayeshpur eventually changed the situation gradually. “It is only such active role of the Central police people dared to come out to vote in Gayeshpur this time making an exception’, a voter at Kantaganj Adarsha Sikshaniketan said.

Gayeshpur Trinamul leader Sukanta Chatterjee, however, refuted the complaint. “No one of us prevented anybody to cast vote. The allegations are baseless”, he said.