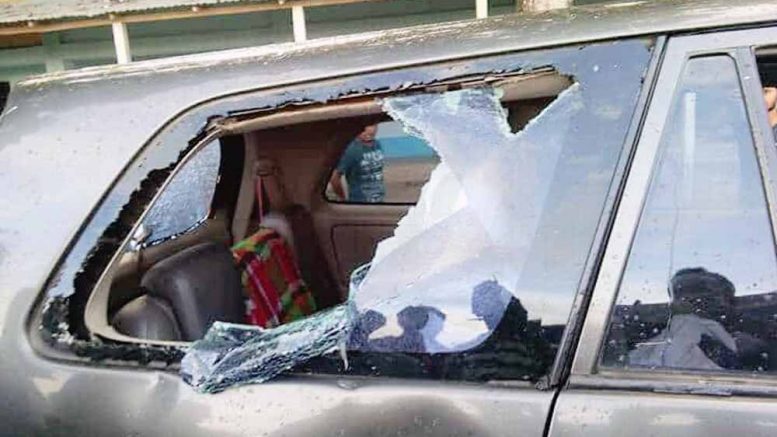 Chakdaha, Aug. 8: A group of violent Trinamul Congress activists allegedly vandalized the car of former Bengal BJP MLA and party’s spokesperson Shamik Bhattacharya and tried to manhandle him on Wednesday afternoon in Nadia’s Chakdaha when he was going to speak at a party meeting organized by party’s district committee in remote Hingnara village. Local BJP sources said that the unruly Trinamul activists also tried to drag him out of the car, but prevented by the BJP supporters who rescued him from the spot and took him to the venue of the meeting later.

The incident sparked tension in the area as police men flung into action and dispersed the erring Trinamul and BJP supporters.

Nadia Trinamul leadership, however, denied involvement to the incident.

Shamik Bhattacharya said, “It is a planned attack. The Trinamul’s plan was to foil today’s programme. I am not surprised, the incident made it amply clear that who are unleashing tension and creating panic in the name of politics in Bengal. The prevailing lawlessness in the state appears to be clear as the Trinamul activists did not even bother to attack an opposition leader”.

Bhattacharya also told that he is yet to decide about to lodge any police complaint on the issue. “I have to talk to senior leadership on the issue first. However, it has little use”, he said.

Local sources said, the incident occurred at about 4pm when Bhattacharya’s Toyota Innova about A TMC supporter at the spot

to take a turn on Bangaon road towards Hingnara at the NH34 crossing.

“Trinamul workers with black and party flags blocked way of my car and started raising slogan using abusive language. They were angry about their leaders’ detention at Silchar airport. But, soon they started hitting the car with bamboo, sticks and hurled stones. They eventually had broken the window screen. Our party activists rescued us from the spot”, Bhattacharya said.

Trinamul leader Sadhan Biswas said, however, refuted allegations. He said, “I along with Trinamul workers gathered at Chowrasta to greet TMCP state president Jaya Dutta who was in way to Krishnanagar. At the same time a large number of refugees who migrated from Bangladesh and settled in Chakdah gathered at the spot. I saw them showing black flags to a car. It was a natural outburst of the refugees who suffered the pain of leaving motherland. No car was damaged. The BJP leadership is making drama to gain political mileage. If we had at all wished, we would not just damage a car, but could do more than this”.

BJP leader Mukul Roy, who, a little later passed through the same spot, however, not prevented. Roy said, “people of Nadia will wait to give reply of such attack in 2019 in the loke sabha election”