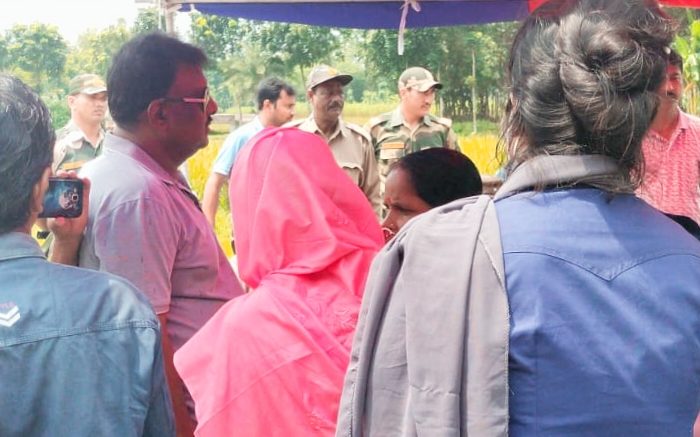 The girl being handed over to the Indian authorities in Gede

Gede, Sept. 4: An Indian girl trafficked to Bangladesh and recovered by local police, was repatriated on Sunday due to direct intervention of the Calcutta High Court, which categorically directed the centre to bring her back and to produce before the court on September 12.

On August 22, Justice Sampa Sarkar directed the Indian High Commission at Dhaka to coordinate with the Home Department of Bangladesh and other concerned authorities involved in the process of repatriation in the wake of a dilly-dallying approach.

On Sunday morning a team of the Bangladesh government crossed their territory in Darshana to enter India and handed over the girl to the Indian authorities at the Gede International Check post in Nadia, in presence of Police, BSF, and Officials of the Ministry of External Affairs, who were present to receive her as per the direction of the Calcutta High Court.

The girl was later taken to Ranghat subdivisional hospital for medical examination. She was handed over to her parents after recording a statement before a magistrate at the ACJM court in Ranaghat.

“Bringing back the girl home has been made possible due to a sincere and very proactive initiative of Justice Sampa Sarkar, who involved the central agencies for recovery of the girl and repatriation at the same time. It is a great achievement for all as order becomes effective and executed beyond the territorial jurisdiction of the court”, said advocate Susmita Saha Dutta, who fought the case free of cost for the girl’s father who filed a petition seeking an order to direct the centre and state government to recover the girl from Bangladesh.

Police sources said that the victim girl, a student of class XI, developed a friendship with a Bangladeshi youth last year through a virtual gaming platform. The youth e on September 12 last year, with the help of some touts, managed to elope the girl and took her to Kushthia in Bangladesh crossing the border.

The girl’s father on the next day lodged a complaint at the Taherpur police station against some suspects. But the police took little initiative to find out the girl. A few days later the girl’s father received a call from her daughter, who claimed to be trafficked to Bangladesh, and told him to rescue her.

The girl’s father again approached the police for help, but little was done by it. Nadia police authorities claimed that they informed the higher authorities. But procedural delay prompted the girl’s father to approach the Calcutta High Court.

The girl’s father with the help of social activist Ranjan Banerjee, a professor of Bethuadahari College,  filed a petition before the Calcutta High Court seeking an order for centre and the state government to coordinate to recover her daughter from Bangladesh.

Advocate Niladri Saha, who jointly fought the case with Susmita Saha Dutta said, “Justice Sampa Sarkar in a very sincere approach involved the central government agencies from the beginning, particularly the Ministry of External Affairs, the Dhaka-based Indian High Commission to coordinate within themselves so that the girl is recovered and repatriated as early as possible”.

On the initiative of the Indian High Commission, the Bangladesh government agencies also become active and the girl was eventually recovered in August. “We were told she was kept at home in Kushthia. Apart from the Bangladesh government, a social organization in that country also extended support to get the girl back home”, Professor Ranjan Bandopadhyay told The NfN.

The girl’s parents express their gratitude to all for their support to get their daughter back home. “We will remain indebted to them all”, the girl’s father said.

In February this year in a similar incident, another girl trafficked to Bangladesh was repatriated due Calcutta High Court’s intervention following an order by Justice Rajasekhar Mantha who responding to a petition filed by her mother of the girl directed the Centre to take necessary steps to get the girl back home in India.