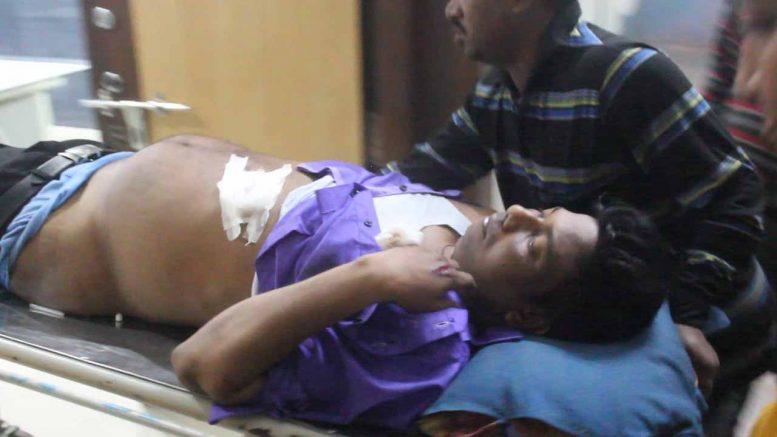 Santanu at the JNM Hospital a little before his death

Chakdah, Feb. 11: A Trinamul worker in Nadia’s Chakdaha was shot dead at from close range allegedly by miscreants having proximity to a rival section of the party in the KBM area of the town on Sunday night during a cultural programme.

Santanu Sil (32), who owns a mobile phone shop and secretary of Kalpanata club in the town was attacked at the club ground during a musical soiree.  Miscreants allegedly led by one Aman Roy (alias Kalu) and his brother Hampi fired two bullets targeting him. While one bullet missed the target, the other pierced his chest. Santanu was rushed to Chakdaha state general hospital, from where he was shifted to Jawaharlal Nehru Memorial hospital in Kalyani, where he succumbed to injuries.

Santanu through  out the day was busy organising a sports and athletics meet in the locality.

“A group of miscreants which was involved attacking Trinamul’s youth wing leader Soumitra Bhattacharyya on November 2 last year, were involved behind attack on Santanu” – A local resident in KBM.

The incident has embarrassed the Trinamul leadership in the district as the intra-party rivalry surfaced up again barely few hours ahead of chief minister Mamata Banerjee’s visit to the district.

Family members of Santanu, who accompanied him to hospital in Kalyani categorically alleged that the miscreants close to the ruling section of the Trinamul Congress are behind the attack.

Sadhan Biswas, Trinamul’s youth wing president in Chakdaha, who accompanied Santanu to JNM Hospital in Kalyani, however, ruled our internal bickering. He said: “The miscreants are behind the attack. We will tell police to nab the culprits”.

Local sources claimed that miscreants which was involved attacking a section of Trinamul youth wing leader Soumitra Bhattacharyya on the night of November 2 last year, were involved in Sunday night attack.

Party insiders said that miscreants which unleashed terror last year have become active once again due to inaction by police. “On February 8 these miscreants fired at another businessman in the area, who however, managed to escape unhurt. He lodged a complaint at Chakdaha police station. However, police did not bother to start a case so far. On Friday a lady computer teacher was also attacked in the same area. She was threatened at gun point, her mobile phone, purse were snatched. She also lodged a complaint at the Chakdah police station, but no case was registered”, a local resident said.

UPDATE: POLICE HAVE ARRESTED PRIME ACCUSED AMAN ROY (KALU) FROM A ROAD SIDE EATERY ON NH34 ON MONDAY EVENING.