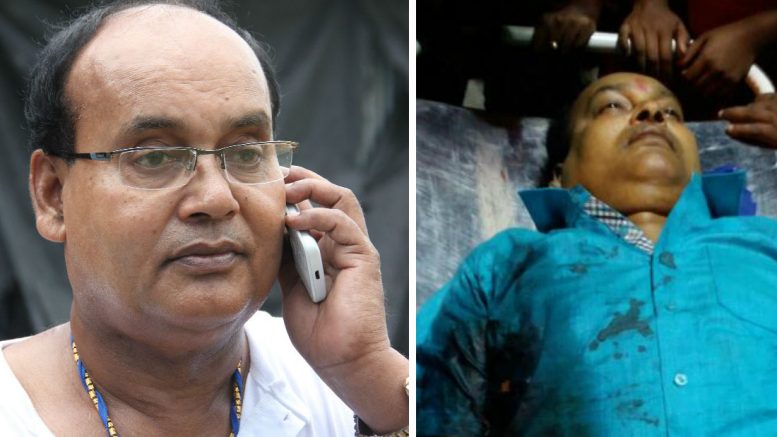 A gang of about six assailants in black attire with their face covered attacked Biswas at about 8.15pm and pumped four bullets at him. Two bullets missed target, while two others pierced his chest killing him on the spot. He was rushed to Bogula primary health centre where he was pronounced dead.

The murder unleashed a panic in the area as shops and business establishments pulled down their shutters immediately.

Police have started a murder case. However, they are still clueless about the motive behind the murder.

Party sources said, the deadly attack carried out a little after Biswas arrived at the party office after visiting a doctor. His personal body guard was also on leave today and the opportunity the miscreants apparently used.

Srish Kumar Sikdar, a party worker and an eye witness said: “There were about 15 party workers inside the party office. We were discussing party matters when the miscreants first open fire outside to disperse the pedestrians. Hearing the firing, I was just trying to coming out from inside when the assailants entered inside brandishing firearm. One of the assailants came closer to Dulal da and fired at least four rounds. Initially he missed target as Dulalda was trying to hide under the table, but the attackers came closer again and fired at his chest twice. His son tried to resist him, but failed. Some party workers thrown plastic chairs at the assailants, but they were threatened at gun point and left”.

Biswas a former CPI (M) leader and accused at least in three murder cases, had joined Trinamul Congress during June 2012.

His brother Swapan Biswas, a CPI (M) leader was also killed by Congress activists in 2005 at Bhaina rail station.

Later in the same year, 3 Congress workers were murdered in which Biswas was an accused and arrested. He, however, released on bail.

District Trinamul president Ujjwal Biswas blamed the BJP and CPI (M) for the murder. “Miscreants with allegiance to BJP and CPM killed Dulal Biswas. These two parties are trying to unleash terror in the state”.

Trinamul Congress general secretary Partha Chatterjee in Kolkata has also accused the BJP for the murder. He would visit Bogula along with party MP Abhishek Bandopadhyay tomorrow to pay tribute to the deceased leader.

Nadia BJP president Ashutosh Pal has refuted the allegations. He said: “We do not patronize politics of murder. The Trinamul leaders are now killed in the state by own party men. I guess Dulal Biswas was also killed due to internal feud. A proper investigation can only reveal the truth”