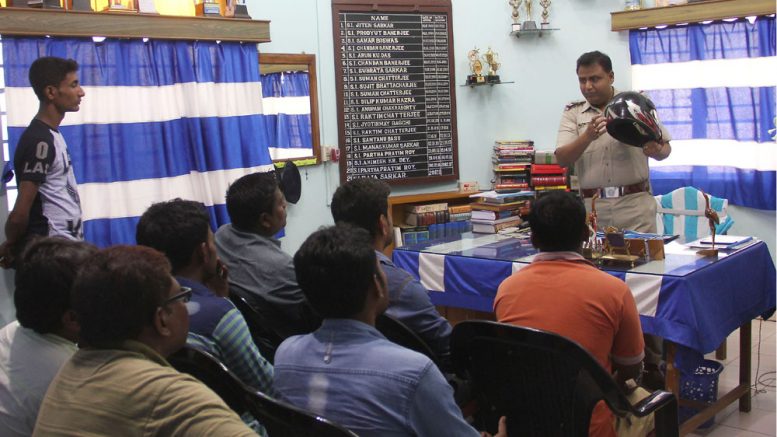 Santipur, April 16: In an attempt to create awareness about importance of using helmet while riding, the Santipur police have started a weekend counseling session for the motorcyclists in the town.

As the cops have found that the awareness campaign for use of helmet launched by the state government yet to be taken seriously by the motorcyclists, who blatantly violating the rule repeatedly paying paltry amount of penalty, the Santipur police have started organizing weekend counseling for motorcyclists who would be caught without helmet.

The counseling session began from this Sunday for about 30 motorcyclists who were caught by police without helmet.

To begin these motorcyclists caught during first two weeks of April, were asked to attend a counseling session on Sunday when they got back their licenses seized by police after appearing there with helmets.

Officer in charge of Santipur police station Raja Sarkar individually talked to each of them asking them about reason for not using helmet and also explained its importance to their lives.

“For over last one year we have been trying to make the motorcyclists aware about the importance of helmet in many ways. But, it hardly paid off. Bikers without helmet often play cat and mouse game with cops on road. It appeared that they would not become conscious until meet with accident. So we decided to organize counseling session to make them aware about the importance of helmet in physical term”, OC Santipur PS Raja Sarkar said.

In Nadia from January to March 15 motorcyclists were died in different accidents, most of these victims were without helmet. The death toll increased further on Sunday morning when Apurba Halder (19) and Suraj Sonkar (18), residents of Kalian Rathtala, died after hitting a mini track on Kalyani Expressway. The deceased youths too were riding without helmet, police said.

“In the last one year we have caught many motorcyclists without helmet and penalized them. But, many of become repeated offenders as the amount of penalty is just Rupees 100, which is quite affordable. So we invited the errant bikers today to say them that collecting government revenue is not our objective. We are concerned to save their lives. We explained why helmet is important from anatomical aspect and the importance of one’s life to family members”, OC Raja Sarkar said.

From April 1 to April 14 police in Santipur caught the helmetless bikers and seized their license only.

“We told them to appear at the police station for the license and to have chat with us over a cup of tea”, said the OC.

The OC individually asked each of them about their explanation, but all remained silent.

OC Raja Sarkar broke the silence and explained the importance of helmet then.

“This is an earnest endeavor started by police to make motorcyclists aware. Today we did not fine them, just tried to sensitize them about importance of their life. We will invite other motorcyclists caught similarly on every weekend”, said the OC.

Ananda Sharma, a garment shop worker, who attended the counseling today said: “I am very impressed with police initiative. I was feeling quite embarrassing”.

Additional SP Swati Bhangalia said: “This is definitely a good initiative by Santipur police, which others police statios should follow”.