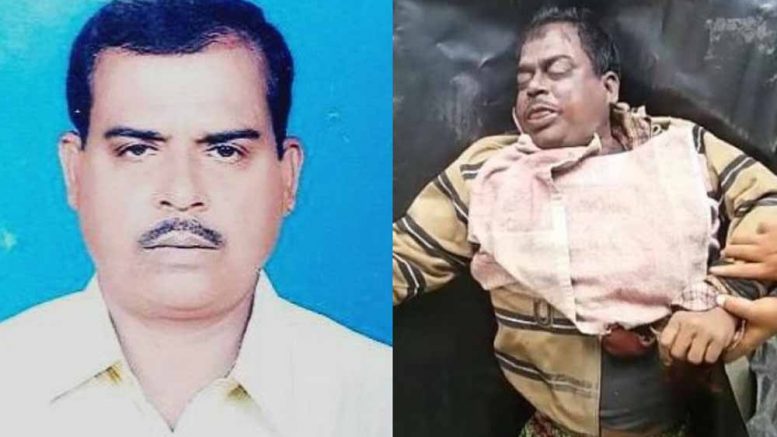 Gangnapur, Dec. 20: Mystery gripped Gangnapur on Wednesday following body of an elderly Trinamul Congress leader was found during the wee hours. Body of Pramatha Sikdar (61), an elected member to the Trianamul ruled Ranaghat-II panchayat samity, was found lying in a field, close to his residence. Police suspect that Sikdar, who was party’s former youth wing president in the area, was strangled to death.

The senior leader, who was a farmer by profession left home on Tuesday evening and did not return home. A search in the night turned futile as his mobile phone was found switched off. The body was traced in the morning.

On June 13 last year, younger brother of the deceased leader, Arun Sikdar (41) was shot dead by miscreants allegedly due to inner party bickering. He was Trinamul’s Ranaghat –II block president.

Today Police have started a murder case against unidentified assailants on the basis of a complaint lodged by victim’s wife Sandhya Sikdar. However, the cops appear to be in dark about the motive behind the murder.

The family members also could not help police either by appraising them about any suspect or motive behind that could led to murder. However, the Trinamul leadership has blamed the CPM for the murder, which has stronghold in the area.

Local block Trinamul youth committee president Debanjan Guha Thakurta said: “Pramatha Da was very soft spoken and popular in the area. The CPM which won the last assembly poll here (Ranaghat Dakshin-SC) was anxious about his popularity. We suspect that the miscreants associated with the CPM killed him in bid to unleash terror in the area so that they could easily win the ensuing panchayat election here”.

Refuting the allegations CPM Nadia district secretary Sumit De said: “In Trinamul rule the Trinamul leaders are mostly being killed due to their party bickering. By blaming the others, the Trinamul leadership is just trying hide their embarrassment and misleading people”.

Both Anup Sikdar and Papiya Biswas, son and daughter of the deceased leader stated that they are not suspecting anyone. “We have no idea about the motive. My father had apparently no enemy. It is a mystery that why my father was killed”, said son Anup Sikdar.