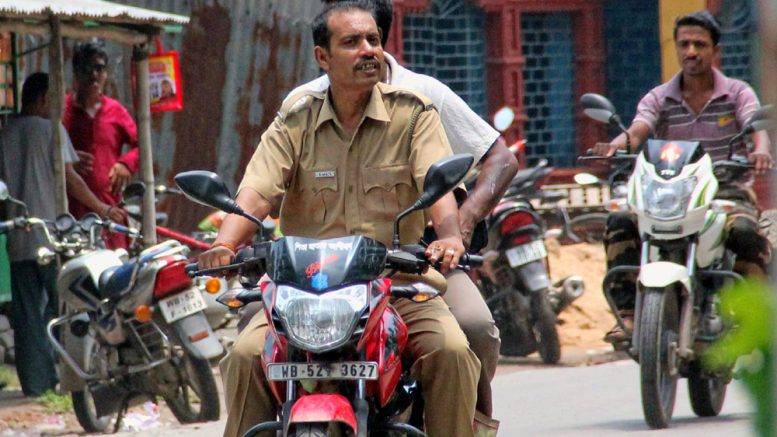 A police officer riding bike without helmet in Santipur.

Krishnaganj, March 27: A team of Krishnaganj police in Nadia today was compelled to fine one of their colleagues, a constable, to pacify a mob who detained him for riding a bike without helmet at the spot exactly where the cops used to fine bikers without helmet.

Constable Bishu Dey was today made to realise that he too can be accused of violation of law as a helmet less biker for which he often fine others on the roads as part of the state government’s ‘safe drive – save life ‘ initiative.

The villagers stopped him and asked him why he was riding without helmet. The constable tried to justify that he was busy with HS exam duty and could not bring the helmet in hurry. Buy, the villagers were unconvinced and told him to pay fine.

Biddyut Das, a local said: “We told the constable to pay fine similarly as we often pay and never spared for such hurriedness. We also called the police from Krishnaganj police station to collect the fine. We kept the constable detained at the spot until senior  police officers arrived at the spot”.

A little later Officer in charge of Krishnaganj police station Mukund Bhattacharya arrived at the spot, but his request to allow the constable to go was refuted.

A local said, “senior officers admonished the constable for riding without bike, but insisting to let him go without fine, which we protested. We said he is accused of same violation for which he often fine others and so be treated equally”.

The Constable was allowed to go only after the police team fined him Rupees 100 for riding the bike without helmet. The villagers were convinced only after checking the memo of the penalty.

Krishnaganj OC Mukund Bhattacharya confirmed The Telegraph over phone about the slapped on the constable.

“We have fined him for riding the bike without helmet on the spot and also told him to show documents of the bike he was riding”, he said.

Local panchayat member Apurba Biswas said: “The locals were angry as the cops often allegedly harass bikers in the name of checking. So they today stopped and questioned the constable that how can he ride without helmet being a law enforcer”.

Local sources claimed that the incident is an outcome if a sunday night incident when two youths were detained and allegedly harassed by some surveilling cop when they were busy going to the local hospital to see a patient.

Bimal Biswas, a local said: “state government’s initiative to save lives on roads  is good , but it is not just for people, but for all.Police cannot be an exception”.

Nadia superintendent of police Sheeshram Jhanjharia too echoed this. “Nobody is beyond the law. Cops should be more careful and make instance before the people”, he said.