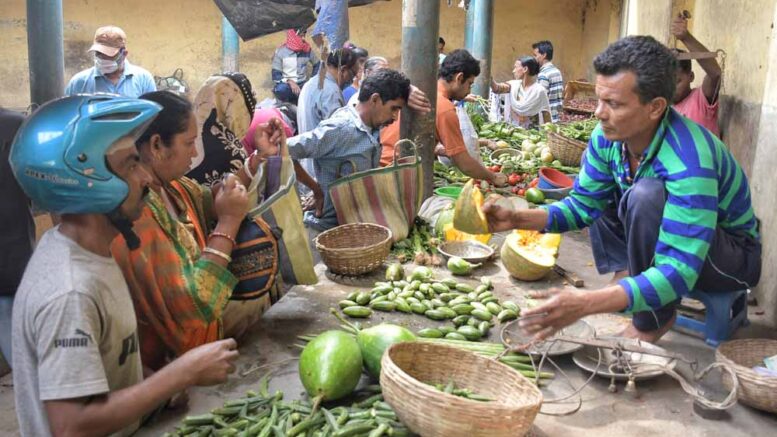 People without facial mask crowded a market in Nadia

Krishnanagar, Aug. 5: Concerned over the increasing trend of Covid positive cases in the district, the Nadia district administration on Wednesday has announced imposition of a weeklong comprehensive round-the-clock lockdown from August 8 to 14 in the 8 municipality towns and 25-gram panchayat areas in a bid to contain the deadly viral infection.

The district administration has observed that a large section of people in the affected areas are not at all complying with the precautionary measure as per the guidelines of the state government and crowding the markets and roads everyday creating vulnerable situations.

District Magistrate Vibhu Goel, “In last one month number of positive cases in these areas has increased alarmingly. The increasing trend is being continued whereas a large section of people become reckless not obeying the safety guidelines at all creating dangerous sisutaiton. Therefore as a precaution we have compelled to impose lockdown in specific areas.”

The Wedenesday evenging’s order (No. 1380/Health) issued by the district administration states that during the lockdown all shops including road side dhaba, tea stalls, eateries, market complexes, government and private offices except essential services will remain closed. All religious and social activities except prescheduled marriage ceremonies and last rites in case of any death will also be suspended. All transport facilities except for long distance from the district will be prohibited. However, vehicles will be allowed to pass through the NH12 that goes through district without any stoppage in the zones.

The district administration has made it clear that there will be no relaxation for marketing during the morning hours similar to earlier occasions.

“We have issued the lockdown order two days’ in advance so that people can store their food and essential items in sufficient quantities and do not require to step out of home during the lockdown”, District Magistrate Vibhu Goel added further.