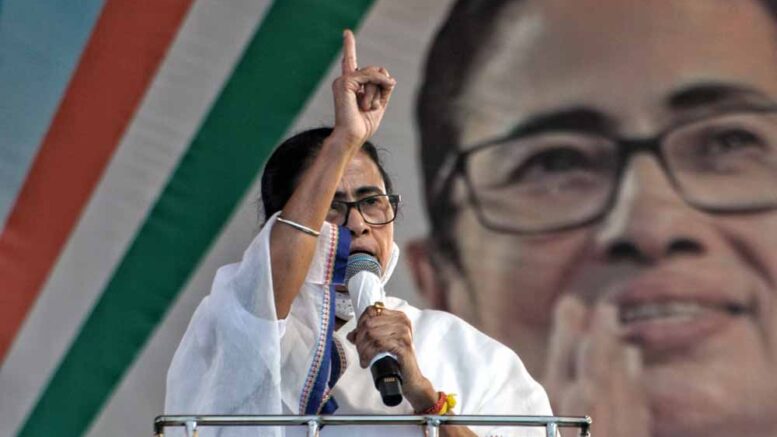 Mamata Banerjee speaking at a public meeting in Habibpur near Ranaghat on Monday. Picture by Pranab Debnath

Habibpur (Ranaghat), Jan. 11: Mamata Banerjee on Monday reassured the Matuas that they are very much Indian citizens and nobody can drive them out of the country. Ruling out the need of the Citizenship (Amendment) Act, she said that it would rather put the refugees in deep problem once implemented.

Her assertion came at a time when the BJP all set to play the citizenship card ahead of the ensuing assembly poll as some of its central leaders announced that the process of implementation of the Citizenship Act would likely begin from February. Home Minister Amit Shah is also expected to announce a timeline when he would visit the Matua hub in Thakurnagar on January 30 since a section of the Matuas led by party MP and All India Matua Mahasangha chief Santanu Thakur has been desperately demanding a specific timeframe for implementation of the citizenship matrix.

Matuas are a group of Hindu refugees from Bangladesh who dominate the electorate in a major part of Nadia and North 24 Parganas and a few districts in North Bengal as well. While speaking at a rally in Habibpur she said, “Many of you have come here more than 50 years ago…you are all naturally Indian citizen. This is your home too…How can they offer you citizenship through the act which will actually rob your right as a citizen.”

“The BJP has brought this act which will drive you out of the country…we will rather drive them out democratically”, she said calling upon people defeat the BJP terming it a ‘junk’ party that is now inducting rotten leaders in Bengal.

“If the CAA is allowed to be implemented, they would ask you for your grandmother’s age, grandfather’s date of birth…Will you be able to submit all these?”, Mamata said, adding that the state government has ensured their rights as citizens by recognising the refugee colonies.

“The recognition of the colonies by the state government made you a citizen of this country naturally. As per policy decision of our government, we have given free hold land deeds to people residing at 94 refugee colonies. There are 213 refugee colonies where same free hold land deeds will be issued soon. The process has begun. So you do not need to be at the mercy of anybody for any new citizenship certificate…Nobody can evict you from here”, she said adding that she assured this being the chief minister of Bengal.

“My dear Matua brothers and sister please be sure that no act will rob your rights as citizen of India”, she said.

The announcement was welcomed with strong applause by about twenty thousand strong crowd which attended the rally at the Habibpur Chhatimtala ground organised by the Trinamul’s Nadia district committee.

In the last Lok Sabha election Trinamul Congress faced a debacle in the Matua dominated Ranaghat constituency as out of the seven assembly segments it lost all except Nabadwip.

Since the citizenship issue is a major problem for the Matua who largely migrated from East Pakistan, the BJP won their support in the 2019 Lok sabha poll introducing the Citizenship act. Prime Minister Narendra Modi also visited Thakurnagar – the holy abode of the Matua community and played the citizenship card.

It paid a rich dividend for the BJP since the party won Matua dominated Ranaghat and Bongoan Lok sabha seats.

Since then BJP’s influence among the Matua community increased gradually, which was predominantly a Trinamul support base.

To retain this strong support base the Trinamul led government recently announced Matua Development Board and announced a grant.

In December last year during a rally in Matua dominated Bongaon she also brought together 23 Matua community organisations under a roof and accepted all of their demands that include a state holiday on the birth anniversary of Harichand Thakur and to constitute the Matua Development Board only with the community members.