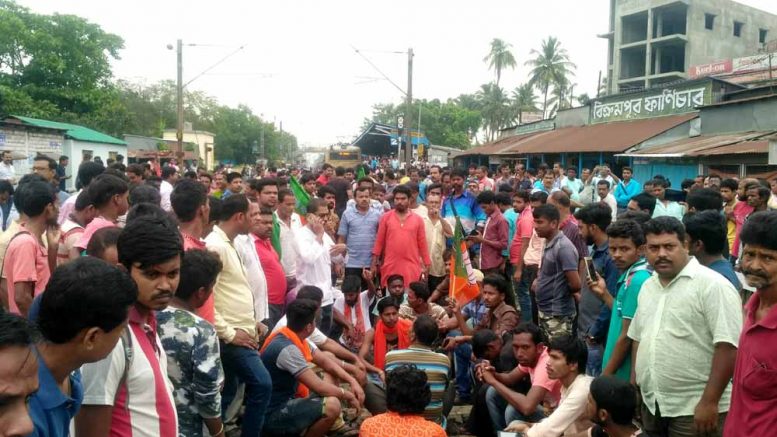 Chakdaha, May 25: Police arrested one of the suspected killers for his alleged involvement into the murder of BJP activist Santu Ghosh who was shot dead in Nadia’s Chakdaha on Friday night.

Police sources said, one of the prime suspects identified as Bharat Biswas alias Pochen was arrested from a hideout on Saturday evening in Chakdah town.

Nadia superintendent of police Rupesh Kumar said that one person arrested in connection with murder of Santu Ghosh on Saturday evening. Police have also recovered a pair of slippers of a suspect, who however, went absconding.

“We have arrested Bharat Biswas alias Pochen for his alleged involvement into the murder of Santu Ghosh. He has confessed his involvement in the murder. Blood stains of the victim were also found on the jeans of the arrested accused. We have recovered the jeans as evidence. The motive, however, being probed. We have also identified another suspect in the case. We have recovered his slippers of another suspect, who however, remain absconding”, Rupesh Kumar said.

Accused Bharat has been charged for murder and will be produced before additional chief judicial magistrate’s court in Kalyani on Sunday.

Earlier in the day angry BJP supporters blocked train services and National highway 12 at several places in Nadia including Chakdah on Saturday paralyzing the normal life demanding arrest of the culprits involved in murder of Santu Ghosh, claiming him as their party activist.

The death immediately prompted BJP leadership in Chakdah to claim Santu as their party worker, who gheraoed Chakdah police station in night which contained till the wee hours of Saturday morning.