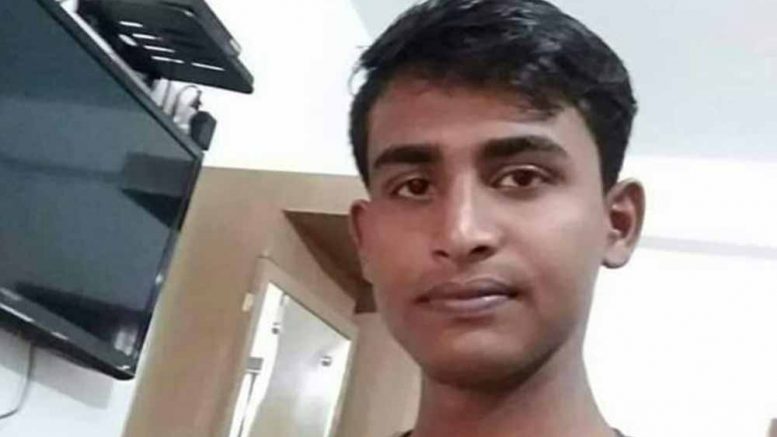 Chakdaha, May 24: Santu Ghosh (25), a BJP activist was shot dead in Gorpara area of Nadia’s Chakdaha on Friday night by unidentified miscreants a little after he returned home from work. Family sources said that at about 10 pm two miscreants called him outside and fired from close range near his home in Tapoban More. Santu, who as per the BJP’s claim, was a member of local Mandal, was rushed to Chakdaha state general hospital where the doctors declared him dead.

A doctor of Chakdah Hospital said, the deceased was shot once below his chin that killed him on the spot. The deceased youth was unmarried. Nadia BJP leadership has claimed that Santu was killed because he left Trinamul Congress a few months ago to join BJP and also actively participated in the party’s election campaign. Party’s youth wing Bharatiya Yuva Morcha’s Nadia district committee Secretary Kaushik Bhowmik said, “Santu was killed because he left Trinamul. On Thursday evening he also walked with us in a victory rally organized by the party in Chakdah town. He was threatened since then”.

BJP’s Chakdaha town committee secretary Shyamal Biswas said, “Santu was killed by Trinamul because the it apparently tried to convey a message to its workers that they would meet the same fate like Santu if they dared to join BJP leaving their loyalty with Trinamul”.

Local sources in Gorpara area under Ward-19 of the town said, that Santu was a long time associate with Pintu Nag.

Santu’s father Sadhu Charan Ghosh, a confectionery worker, said, “As far as I know my son was never associated with any political party. He was, however, close to former Trinamul councilor Pintu Nag”.

“I have no idea if my son joined BJP recently. He worked at a jewelers shop in Calcutta. He was very close to former Trinamul councilor Pintu Nag. My son returned at 9pm tonight. He was at home when two persons summoned him. It appeared they are known to my son. A little after I heard a firing and some told me that my son was shot at…”.

Meanwhile, angry BJP workers gheraoed the Chakdah police station demanding arrest of the culprits. Police have so far could not arrest nobody in this connection.

Police have started a suo moto murder case. A senior police officer said, “It appears that the deceased youth was killed most probably due to any personal rivalry. No clear political motive behind the murder has so far been established”.