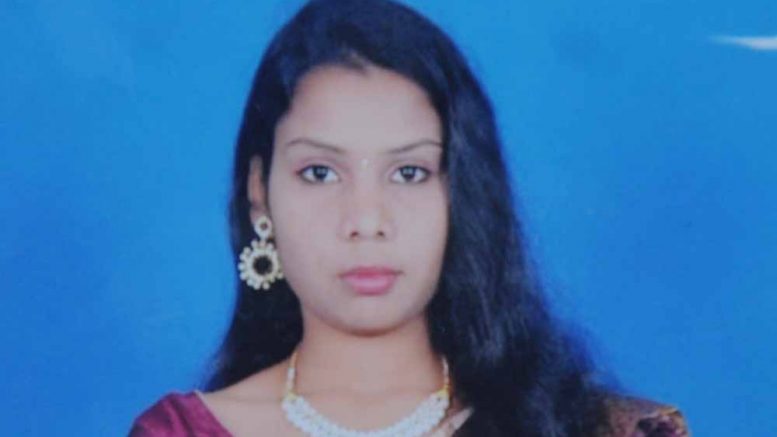 Krishnanagar, Sept. 29: Police have arrested a young railway gateman allegedly for setting her girlfriend on fire after he came to know that the girl’s father has negotiated her marriage elsewhere. The girl was critically burnt and died late on Thursday night in Saktinagar district hospital, where in a dying statement she told police and doctors that her fiancé Amalesh tried to rape and kill her by hanging her with a rope from the ceiling before setting her ablaze, but eventually failed due to her resistance.

Police today recovered the rope and container of kerosene from the place of the crime as stated by the girl, but could not confirm if she was sexually tortured as the lower parts of the body was completely charred which made it difficult for doctors to examine.

The deceased girl identified as Punam Banspor (18), a class 9 dropout, who was daughter of Ram Avatar Banspor, a sweeper attached to Krishnanagar rail station. She was schedule to get married in Chandan Nagar on December 4.

The locals nabbed Amalesh, who was witnessing the girl being charred, and handed him over to police. He was produced before a court in Krishnanagar today and taken to police custody for five days.

Police, however, could not arrest his accomplice Krishna Kurmi, son of an eastern railway employee, who managed to flee after the crime.

Amalesh was charged under section 302 (murder) and 326 (causing grievous hurt) of IPC and produced before an additional chief judicial magistrate’s court in Krishnanagar which ordered five day’s police custody for him.

Nadia police superintendent Sheesh Ram Jhajharia said: “The girl was having an affair with the youth. It appears that their relationship got bitter which led the murder most probably. We have arrested the prime accused. The exact motive, however, would soon come out”.

Amalesh who joined as a gateman at Dhubulia rail station last year was allotted a quarter at the rail station para in Krishnanagar, where the girl stayed with her parents. Amalesh developed an affair with girl few months ago. The girl’s father knowing this made a marriage proposal to him for her daughter Punam. “However, he denied having any affair with my daughter”, said girl’s father Ram Avtar. “I then negotiated her marriage in Chandan Nagar. Nevertheless, Amalesh used to tease my daughter and made indecent proposal. His motive was not good so I told him not to disturb my daughter”.

But, on Thursday when the locals were busy celebration puja, Amalesh summoned the girl to her quarter, where he tried to rape her first and then tried to hang her with the rope. But, Amalesh and Krishna could not manage her due to a scuffle among them.

“It appears that Amalesh summoned the girl with an indecent motive. He tried to rape her. But the girl resisted. This apparently made him angry when he with support of his friend Krishna tried to kill her by hanging with a rope. But, they failed to overpower the girl after which they set her on fire pouring kerosene” – A police officer

Girl’s father Ram Avtar said: “It appears that Amalesh had an intention to sexually exploit my daughter. So he refused to marry her denying an affair with her when I made a marriage proposal to him”.

Today a delegation of Association of Protection of Democratic Rights led by state committee vice president Tapas Chakraborty met the victim’s family members and the police, who demanded a medical test of the accused Amalesh to confirm if he sexually tortured the girl. “If it is found that the youth had sexually tortured the girl, additional charges in this regard should be slapped on him”, Tapas Chakraborty said.