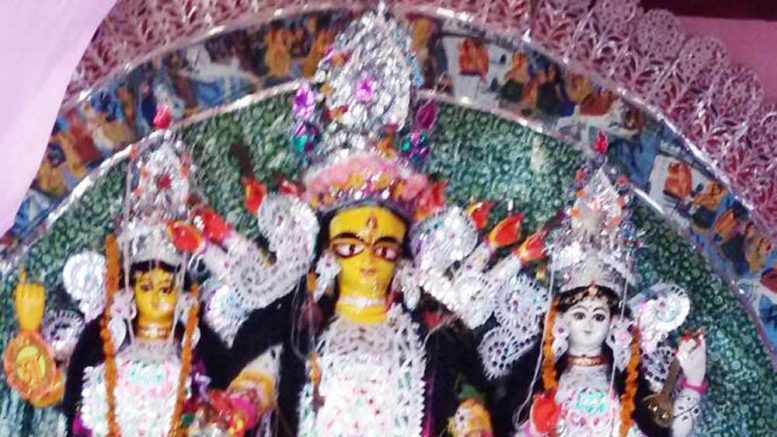 The Durga idol after the theft on Saturday morning.

Thanarpara, Sept. 30: Gold and silver jewelries worth over Rupees 7 lakhs were stolen early this morning from the Durga idol of the 353 years old Puja organized at the house of the descendants of a zamindar family in Dhoradaha village of Thanarpara.

This is the first time in over three century long history of the Chaudhuri family such a theft has taken place. The deity of the family is known in the locality as “Choto Maa” and very popular among the villagers. The incident unleashed a shock wave among the local villagers, who actively take part in the puja despite it is a family affair.

Sources said that a Bishu Pal, a domestic help of the family had first noticed the heist and alerted the family members. Two civic volunteers deputed at the mandap by local police authorities for night vigilance, who supposed to be on duty till 5 am, were not present during the alleged heist.

The Thanarpara police have started an investigation on the basis of a complaint lodged by present head of the family Himendra Nath Chaudhuri, a retired school teacher. However, no one could be arrested so far in this connection.

Chaudhuri said: “The Devi idol was decorated with jewelries of about 220 gram gold and 45 gram silver, which include necklaces, ear rings, hair band, nose ring with chain, crowns, bindi made of gold. All these jewelries were stolen from body of the deity. Apart from the jewelries the miscreants had also taken away 12 saris those kept in the mandap”.

“Around 4-am today, our domestic help alerted us about the theft. We are in shock. The jewelries of our idol had never been stolen before. The theft today robbed the festive mood in the entire locality”,” Chaudhuri said.

“Every year we decorate the Devi idol with these ornaments, which remain with the idol until immersion. The tradition is being maintained for last 352 years. Today we continued the puja despite the heist with a fresh ‘Abhiseka’, said Himendra Nath’s son Arghya, a teacher and a known Trinamul leader in the area.