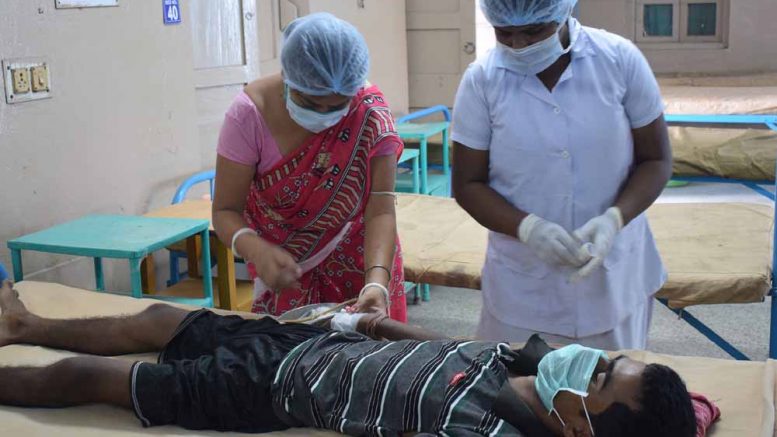 Santipur,  May 5: A young ambulance driver engaged in Covid duties was allegedly beaten up by some of his neighbors apparently for flouting their instruction not to enter the locality when he returned home in Santipur town on Tuesday morning after a gap of about a week.

Being apprehensive of getting affected by the deadly virus through him, since he is engaged in ferrying Covid patients, the panicked villagers beat-up ambulance driver Asit Sarkar (28) ruthlessly with sticks until he fell unconscious near his home in Barojiakur village of Santipur.

The neighbors did not even spare his elderly parents of the driver when they tried to save him. The couple Ashim and Sima Sarkar were also thrashed by the neighbors who also threatened them for a dire consequence if dared to lodge any police complaint.

Some other neighbors eventually rescued the trio and took them to Santipur state general hospital, where Asit was admitted with suspected internal hemorrhage, while his parents were released after primary treatment.

Police have started a case against four persons on the basis of a complaint lodged at the Santipur police station by the victim’s father Ashim Sarkar. However, no one could so far been arrested in this connection when the report last came in.

Family sources said, the victim is attached to a 24×7 referral government-sponsored National ambulance service (“102”) meant for pregnant women & sick infants. However, following the outbreak of Covid, at least 12 such ambulances in service in Nadia were included in the district pool of ambulance for Covid. Asit was deployed for service for ferrying patient from JNM Hospital to SNR Carnival Covid hospital in Kalyani town.

“During the past month, my son could visit home barely once a week. On all the occasions some neighbors turned angry seeing him at home. They eventually asked him not to visit home and  threatened a dire consequence in case he dared to disobey their instruction. They were afraid of Covid attack through my son”, said the victim’s father Ashim Sarkar.

On Tuesday morning Asit returned home after a week and faced resistance by a section of the neighbors. Local sources said, some neighbors dragged out him from home and started beating him with sticks and rods. “We tried to rescue him but they also beat up us”, said the victim’s father.

victim Asit Said, “Some neighbors on repeated occasions threatened me of dire consequence if I visit home. They also threatened in a similar way some other youths who are also involved in ambulance service. We all tried to make them understand appraising about the precaution we take while ferrying patients, but they remained adamant and beaten up me today”.

A visiting doctor at the hospital said, “The patient has suspected multiple internal injuries. X-ray imaging of the chest has been advised. His condition is now stable”.

Medical superintendent of JNM hospital and College of Medicine, Kalyani Avijit Mukherjee said, who requested SDO Kalyani to look into the matter, said, “In the fight against Covid ambulance drivers are playing a great role, so if they are treated with such brutality there would be no one to ferry the patients to hospitals. I hope that good sense would come back among all”.