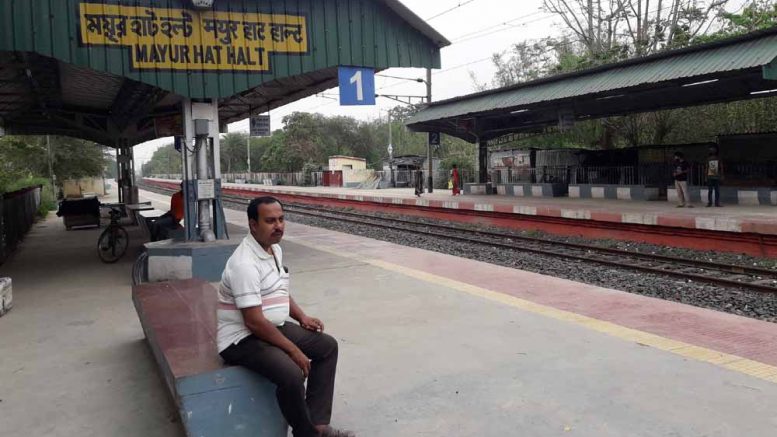 A halt station in Nadia

Ranaghat, May 7: Around 150 halt station contractors in the state have appealed the Railways authorities for financial assistance as they have been struggling hard for survival owing to suspension of the local train services in different routes to fight Covid 19.

The Eastern Railways have 93 such halt station contractors who have appealed the Divisional Commercial Managers for ‘financial help’ since they are without income due to suspension of local train services in different routes.

The halt stations are small way-side railway stations, where few trains stop and not staffed by Railways’ own personnel. Railways authorities engage a contractor for a specific period to issue railway tickets and to maintain the premises. There are around 1000 such halt stations across the country and most of these halt stations are located in rural belts.

In Bengal, the halt station contractors who are associated with Indian Railway Halt Station Workers Association, have appealed to the railway authorities through individual email to provide financial assistance claiming that survival has become tough in the absence of income due to lockdown.

Durgaprasad Roy, 71, who sells tickets at Mayurhat halt station in Sealdah-Gede stretch said, “The Covid scare caused the suspension of train services robbing our income. We are in deep trouble”.

Swadesh Roy, who helps his elderly father in selling ticket said, “Selling ticket even at a small halt station is almost 20 hours service. My father despite his ailing health regularly open counter at 3.40 am and close it after 10.30 pm. But, it appears that railways authorities not sincere to recognize this service”.

Anup Dhar, a member of the Indian Railway Halt Station Workers Association (IRHSWA) , who sells tickets at Karanjali halt station in Lakshmikantapur-Namkhana stretch said, “Every month we first purchase tickets of a certain value from the feeding station. We have to procure tickets in such a way at least in three installments. For this, we usually keep a certain amount as an investment to buy tickets. But, the situation has forced us to use that amount for survival. Now many like me do not know how to buy tickets for sale when the lockdown will be withdrawn”.

“Finding no way I have like many others have appealed the Divisional Commercial Manager and the Ticket Inspectors to arrange for financial assistance, else it will be difficult for us to survive”, Dhar added.

Members of the IRHSWA said the situation is quite alarming for the contractors who are attached to low sale stations like Nischintapur. Sources said many such halt station contractors are surviving on the relief items provided by benevolent individuals and by the local administration.

IRHSWA members meanwhile apprehend further trouble after the withdrawal of lockdown. They are afraid of a fall in their income after lockdown since people would avoid travel mostly due to the absence of money in the pocket.

Contractor Durgaprasad Roy said, “There would be a lesser number of people travel from the halt stations as people around such stations are largely daily wage earners, who are suffered seriously due to lockdown. So we apprehend a drop in the sale of tickets as people would avoid traveling unless emergency”.

An officer at the Divisional Railway Manager’s office in Sealdah said, “We have received some appeals from the contractors. The appropriate authorities will take the decision about their appeal”.