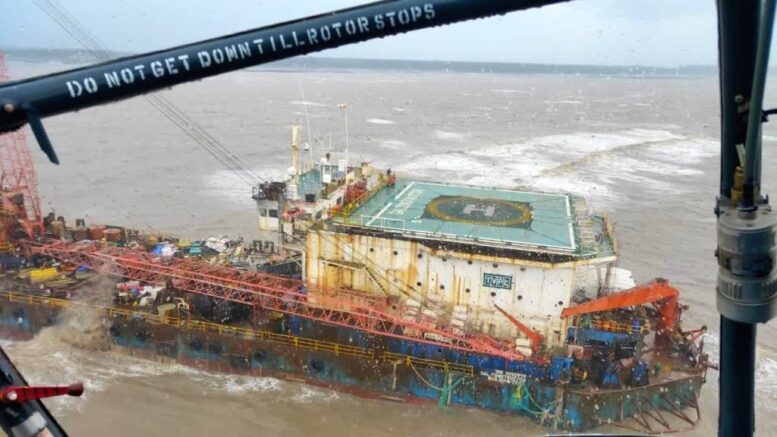 Krishnanagar, May 24: Sevem days after Barge P305 sank off Mumbai coast (Arabian Sea) during cyclone Tauktae at least two youths from Nadia’s Krishnanagar and Tehatta among around fifty others remained untraceable.

With no information available from the government or from their employers, the hapless parents of Sribas Bose, 27, one of the youths from Krishnanagar, has lodged a missing diary at the local police station on Saturday evening.

On the other hand, father of Sajal Biswas, 28, the other missing youth, has rushed to Mumbai. But, even after six days his employer could not offer the whereabouts of his son.

Sribas Bose, a resident of Jahangirpur village in Krishnanagar, who works with Afcons Infrastructure as a waiter on board at P305 barge during when cyclone Tauktae attacked.

Sribas, the only earning member of the family, last talked to his parents during the very hours of the cyclone amid the Arabian Sea. “He told us that the barge caught fire and he was trying hard for a safe location on the barge. He also told us that the rescue team advised him to jump into the sea wearing a life jacket. He also later sent a text message. But, we could not establish any contact with him further”, said Arjun Ghosh, father of Sribas, breaking down in tears.

The elderly farmer with his ailing wife is in deep trouble since Sribas, the only son of the couple, was the sole bread earner of the family. “His survival is a necessity for us. I have been trying to know his whereabouts, but none could offer any news. Finally I have sought help from police lodging a missing diary”, Ghosh said.

Similar is the plight of the parents of Sajal Biswas, of Tehatta’s Bagakhali village. Sajal was a cook posted on the barge. He also went incommunicado since May 16, a little after he made a video call to show the incessant rain and cyclone to his parents.

Two days later his employer informed them over phone that Sajal went missing.

“The caller did not share any further details, rather insisted on visiting Mumbai at the earliest. Finding no way Sajal’s father rushed to Mumbai. Nevertheless, no information has so far been received about him”, said Sajal’s maternal uncle Govinda Sarkar.

Sajal is also the only earning son of the family. His mother Sadhana said, “He went to Mumbai during October last year. Last week, he wished to return home if Covid situation normalised in Bengal. We were also planning to negotiate his marriage…But it appears that it will no longer be possible at all”.

At least 51 persons died when a barge with 261 people on board sank in the evening of May 17 during a severe cyclone. The barge was working on an ONGC project and carrying personnel deployed by the company for offshore drilling. As the cyclone struck, the giant barge’s anchors gave way and it began drifting. It eventually sank in the Arabian Sea.