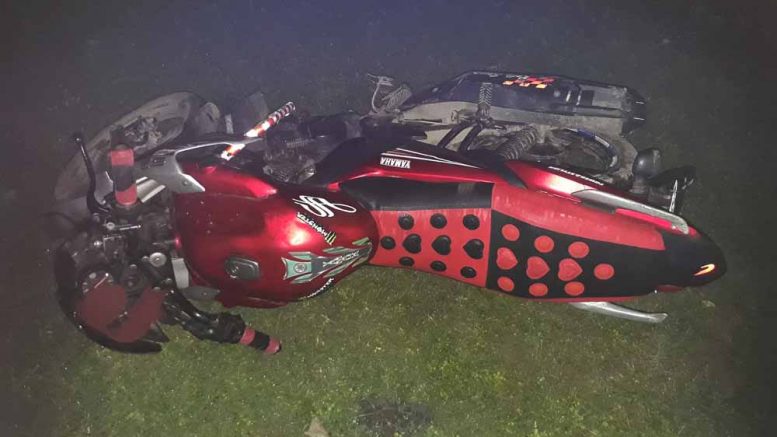 The bike of a victim died in accident in Phulia. Picture by Abhi Ghosh

Ranaghat, October 3: Three motorbike riders, all without helmets, were killed and two of their friends were injured in two separate accidents occurred on NH-34 and Ranaghat-Duttapulia road in Nadia last night.

The first accident occurred around 9am at Duttapulia more, when two youth riding a bike were approaching towards Hanshkhali and rammed on to a lorry coming from the opposite direction of the road. The bike rider Saheb Sardar (25) and his companion on the pillion identified as Krishna Mandal (26) were crushed to death on the spot. Eye witnesses said that they were flung several feet in the air on impact and fell with a thud. Police said the victims were residents of Andipur in Dhantala, who were going to Hanshkhali.

An officer of Dhantala police station said: “The duo landed on the road and died of head injuries. We have learnt that the motorbike was zigzagging along the road when the accident occurred. A shop owner said the rider lost control of his motorbike in a bid to overtake a car and rammed head on to the lorry. The inquest on the bodies suggest that the victims were drunk”.

The accident angered the locals against police for its inaction over reckless driving by bikers particularly on the stretch of road.The local residents in Duttapulia demanded better traffic surveillance in the area. Ramen Biswas, a local resident said:“Police sometimes check only bikers without helmet and slap fine on them, whereas they need to patrol the area to intercept rogue drivers who become uncontrollable on holidays in particular.These include a large section of bikers who wear helmet, but police never book them”.

The second accident occurred at Kalitala under  Santipur police station on NH-34  around 10pm, involving two youths on a motorbike.

Local residents said that three youths riding a bike heading towards phulia from Santipur lost control amidst rain after hitting a toto and fell on the road when a tractor mowed them while coming from opposite direction.

Liton Saha, a resident of Phulia bus stand para died on the spot and pillion riders Suman Mitra and Sankar Das were seriously injured. They were admitted to Ranaghat sub divisional Hospital. Sankar, who is a resident of Belgoria village, was later transferred to JNM Hospital in Kalyani following his condition deteriorated.

“Neither of them was wearing a helmet” an officer at Santipur police station said.

“We suspect both had consumed alcohol and recklessness possibly caused the accident”, the officer said.