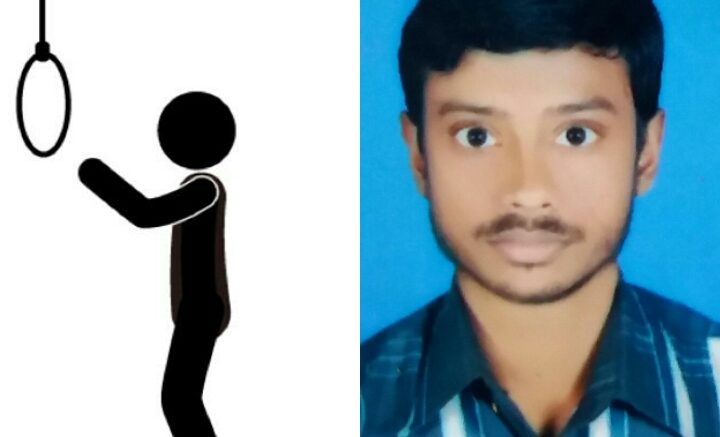 Ranaghat, July 28: A 20 year old BSc first year student of Bogula Sri Krishna College in Nadia committed suicide at his maternal uncle’s home in Dhantala last evening a day after he was allegedly caught cheating in the examination by an invigilator.

The boy originally hailed from North 24-Pargana’s Bagda happened to study staying at the residence of his maternal uncle, who has lodged a police complaint accusing the examination venue authority – Majhdia Sudhir Ranjan Lahiri College, of abetment to commit suicide

The deceased youth Santo Roy, a meritorious student who secured 82% in higher secondary examination, who was son of a sweets shops worker, found hanging with a nylon rope from the ceiling of his study room on Wednesday evening. He was rushed to Ranaghat sub divisional hospital where he was declared dead.

Sources said that on Wednesday while writing in the examination at Majhdia Sudhir Ranjan Lahiri College, an invigilator caught Santo while allegedly adopting unfair means. The invigilator had seized his answer script and sent him off the examination hall.

One of Santo’s classmates said: “Santo did not cheat at all. He cried and pleaded the invigilator a lot, but they did not listen to him

Santo’s maternal Uncle Dipankar Saha, a fodder dealer said: “The invigilator accused him on suspicion and seized his answer scripts by noticing some paper chits lying close to his feet. He did not return the answer script to him and sent him off the examination hall. It was quite humiliating and made him depressed very much which led him to end the life. He scored more than 80% marks both in Madhyamik and higher secondary examination. A student like him need not require adopting unfair means”.

Professor Sarojendra Kar, Principal of the accused Majhdia Sudhir Ranjan Lahiri College, however, rubbished the allegation. “The students of Bogula Sri Krishna College were adopting unfair means from the beginning. They removed the seat numbers and sat together as per their wishes. After that they started cheating in examination by using mobile phones and copying from paper chits. The deceased boy was warned on several occasions and the invigilator had to seize his papers when he continued to act desperately. As a punishment, the answer script was returned after half an hour”.

Professor Kar, however, refused to identify the invigilator who caught Santo.

Principal of Bogula Sri Krishna College Sukhdeb Ghosh said: “Santo was very talented student. It is quite hard to believe that he adopted unfair means in the examination. I would talk to the Majhdia College to know what exactly had happen and also talk to the Governing body of the college if any legal action could be taken into the matter”.

Police today handed over Santo’s body to the family members after post mortem. An officer of Dhantala police said: “We have received a complaint and examining the veracity of the fact from our level”