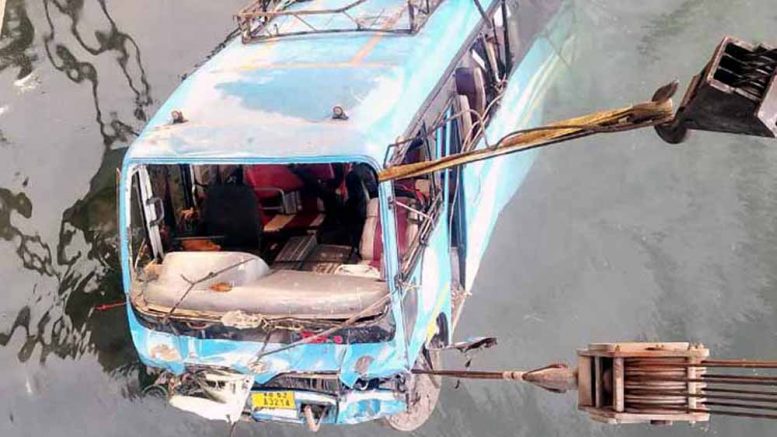 The fateful bus being removed from Ratnakar Bil on Monday evening

Karimpur/Daulatabad, Jan. 29: A Maldah bound bus of North Bengal State Transport Corporation packed with over 50 passengers plunged into a canal in Daulatabad in Murshidabad district crashing through the concrete railing of a bridge while running over it in high speed this morning. Till late evening bodies of 36 trapped passengers were recovered from the bus while over a dozen still m Bereaved family members of a victim

At least five persons survived as they were lucky enough to escape from the fateful bus while it was drowning gradually. Police said that the number of toll could increase further.

The incident occurred at about 6.45 in the morning around an hour later it started journey from Karimpur in Nadia.

According to the survivors, the driver, who was allegedly speaking on mobile phone had apparently lost control of the bus while trying to overtake a lorry in high speed on the bridge. The vehicle rammed on the concrete railing of the bridge, a dilapidated one and eventually fell into the canal, from a height of about 70ft. The victim include at least nine persons from Karimpur, of which at least three are still missing.

The rescue operation begin after 12 in the noon, but the bus could be removed from the Ratnakar bil, only at about 6 in the evening.

Chief minister Mamata Banerjee had flown to the spot today afternoon. She later visited the

Murshidabad Medical College and hospital and returned to the accident spot to monitor the rescue operation.

Earlier in the day, the local residents, turned violent and hit out the police accusing the force for arriving late and to arrange for removal of the bus. Police had to use tear gas shells and lathi charged to disperse the violent mob.

Residents of Karimpur and adjacent areas who feared died in the bus tragedy include: