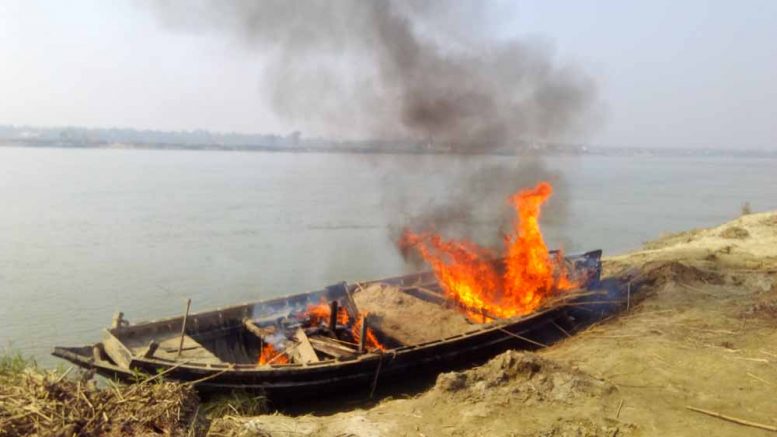 A boat of soil mafias set on fire in Methirdanga

Santipur:  Farmers in Nadia’s Santipur today set ablaze a motor operated boat and damaged two others loaded with earth   for supply to brick kilns in Kalna in Burdwan by miscreants who were removing earth from a ‘char’ land which they have been using for farming for over two decades since losing their land in erosion of Hooghly embankment.

The farmers turned violent as miscreants from Kalna and adjacent areas allegedly engaged by a section of brick-kiln owners of Birdman district have been regularly removing earth from the char lands for supply to brick kiln used by them for farming which surfaced up under Haripur panchayat of Nadia’s Santipur block.

Repeated raids and seizure of boats by Nadia police yet to curb the menace that also created a law and order problem as the miscreants often attack the farmers forcing them to surrender before their will.

A permanent solution, however, still eludes the farmers. This random excavation has made a serious crisis for survival to erosion victim farmers as they are being denied to earn a living.

Today over 100 farmers in Harinpur-Methirdanga village turned violent while working in their fields during the early hours of morning when they noticed that armed miscreants removing earths and loading it to the boats.

The villagers asked them to stop, but the miscreants retaliated hurling bombs. The angry farmers chased the miscreants and took possession of their boats and set one of it on fire.

Bablu Biswas, a farmer said: “Around 1000 farmers in the area started farming on this char land that surfaced up during 1995 after losing land and properties in erosion. The government never raised objection. But for past few months the soil mafias posing threat to our survival. They have been randomly removing from the char land used by the farmers. They supply it to brick fields and threat us often at gun point. Today we resisted them when they were cutting earth”.

Nadia additional district magistrate (land and land reforms) Abhijit Bhattacharyya said: “We are trying our best, but could not stop it as the miscreants are removing earth in the dark of night”.

Santipur MLA Arindam Bhattacharya said:  “I would try to stop such access of miscreants through a talk involving Nadia and Burdwan administration as well as the brick kiln association of both district. Thia needed to be stopped immediately else erosion embrace the area again”.