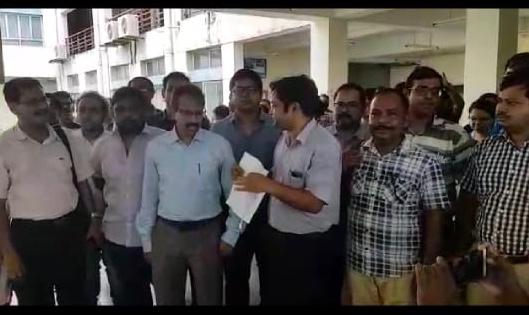 The OPD remained closed for fourth consecutive day, whereas the effort of the hospital authorities to run the emergency was disrupted further with resignation of the doctors. The hospital wore a deserted look as footfall of patients dropped drastically while around 90% patients of the 1000 bedded medical college hospital left for home in absence of any care.

Earlier the doctors held a meeting at the hospital in the morning and later submitted resignation through jointly signed letter addressed to the Registrar, West Bengal University of Health Services.

Kaustabh Chakraborty, one of the resigning doctors said, “We are compelled to resign from service finding no ray of hope for imminent solution of the ongoing problem”.

Expressing solidarity to the agitating junior doctors, the doctors in the letter have stated, “We strongly stand by the demand of junior doctors of security, basic infrastructure, facilities and protection of all health care personnel. Hence in absence of any positive development or initiatives from the government, we following faculties would like to offer resignation from our service”.

“During the past few days we tried best to provide service at the hospital. But, in absence of the junior doctors it is not possible for us to continue it since they are the frontline of the healthcare system”, a doctor said.

Medical superintendent Avijit Mukherjee said, “We were trying our best to provide minimum service at the hospital. But, that too was hampered due to resignation of the doctors which will be sent to higher authorities”.