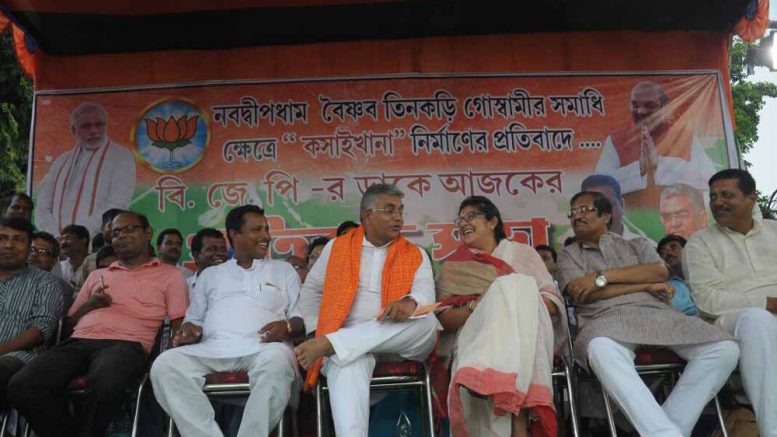 The BJP leadership in Nabadweep during a celebration rally

Krishnanagar/Nabadweep, Aug. 17: Nadia district administration today formally announced scrapping of Rupees 4-crore abattoir (slaughter house) project in the wake of displeasure and protest by the Hindu monks of 26 religious organizations of Nabadweep, Mayapur and Swarupganj which include Iskcon and Bharat Sevashram Sangha. The monks today expressed their happiness on the decision of the administration, even though they did not appear to be convinced enough in absence of any formal written order issued by the district administration. The monks categorically said that the announcement lacks transparency and strong enough to create doubts. District magistrate Sumit Gupta today told media persons that despite construction of the abattoir building is in final stage at the Manipur ghat road in Nabadweep town, the proposed project has been scrapped. “We would now be converting the abattoir building into a vegetable market. The new project is yet to be finalized in full shape”, he said.

The district magistrate, however, refused to make any reply when asked that how a district administration could decide to scrap a project largely funded by the central government.

“I can just say that there will be no slaughter house in Nabadweep town. But I am not competent enough that speak anything more than this”, District magistrate Sumit Gupta reiterated.

Surprisingly enough the district magistrate also refused to confirm if any order was issued in this regard at all.

Nadia district Trinamul Congress president and state correctional home services minister Ujjwal Biswas also echoed the Nadia DM’s statement. “It has already been decided that the abattoir project will be converted into a vegetable market. The details of the project will be announced later”. However, like the DM, the minister refused to elaborate how a centre funded project was scrapped without consulting the central government.

A monk associated with Iskcon said: “We are happy about the decision. However, the announcement of the administration is not clear at all. This is a major decision which needs to be released in written format with all the details in public interest. The announcement is not categorical and lacks transparency”

For BJP, it appears to be an irony as the party appears to be happy with the announcement of scrapping a project that was envisaged and funded by a government at the centre run by them.

State BJP president Dilip Ghosh, today celebrated the scrapping of the project in a public rally. He said: “The abattoir project was conceived by the Congress led UP A government. The BJP never principally supported it. So the project has been scrapped”

Earlier in last month the monks in Nabadweep, Swarupganj and Mayapur made an appeal before union home minister Rajnath Singh to scrap the centre-state jointly funded ‘abattoir’ (slaughter house) being constructed for Nabadweep Municipality on the banks of river Ganga in Nabadweep town.

“We are happy about the decision. However, the announcement of the administration is not clear at all. This is a major decision which needs to be released in written format with all the details in public interest. The announcement is not categorical and lacks transparency which has created lot of confusions and doubts” – An Iskcon Monk

The monks of these maths had alleged that the abattoir would jeopardize the sanctity of the holy town and also pollute river Ganga due to slaughtering of cow, goats and small animals.

In a written petition to the home minister Rajnath Singh and to the Nadia District magistrate Sumit Gupta the monks had termed this ‘abattoir’ project of union ministry of food processing industries as an “unholy initiative” and urged them to stop this ‘dubious attempt’ and ‘conspiracy’ to hurt the emotions of the entire “Sadhu Samaj” in Nabadweep town which is famous being birthplace Lord Chaitanya.