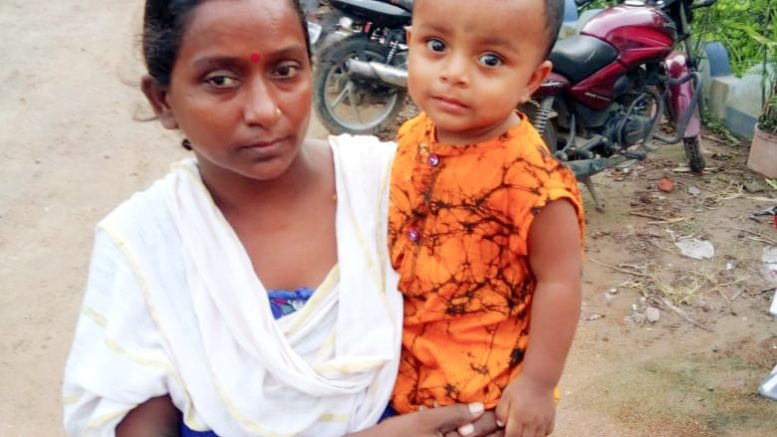 Mamata Biswas with her son Rishav at Chakdah police station

Chakdah, June 16: The 13-month-old breastfeeding baby who was allegedly abducted by his father was rescued by police with the help of villagers in the Shimurali-Manashapota area of Chakdah on Monday evening.

Local sources said the recovery of the baby became possible when Sourav Sharma, a resident of Kanthalpuli-Nimtala in Chakdah where the baby lives, spotted the accused father Bablu Biswas when he was trying to flee with baby.

Sharma, who was driving a car, disembarked and give Bablu a chase alerting local residents who also joined him and nab the accused. Informed by local residents Police rushed to the spot and rescued Bablu from the hands of the angry villagers and also recover the baby.

After a medical check-up, the baby was handed over to his mother Mamata Biswas, who lodged a complaint against her husband Bablu at the Chakdah police station.

On June 11, Bablu, a migrant labourer allegedly abducted his 13-months old breastfeeding baby apparently to settle a score with his wife with whom he is having a conjugal differences.

The mother of the baby has lodged a police complaint against her husband seeking help to trace out him. However, police took little step except insisting that the baby is alright with his father, which prompted the mother to lodge a separate complaint to Ranaghat’s superintendent of police as well as the District Child Protection Officer and Child Line, an NGO.

Superintending of Ranaghat police district V.S.R. Ananthnag said, “Our source identified the accused when he was going to a relative’s house in Shimurali taking the baby with him. On the basis of information received police recovered the baby with the help of local people”.

“We have detained the accused father Bablu Biswas and he is being interrogated as we are trying to know his intention”, the SP said.

After receiving her baby, an elated Mamata Biswas said, “I am very happy to get my baby back. However, at the same time, I will remain worried if my husband makes any fresh attempt to harm him”.