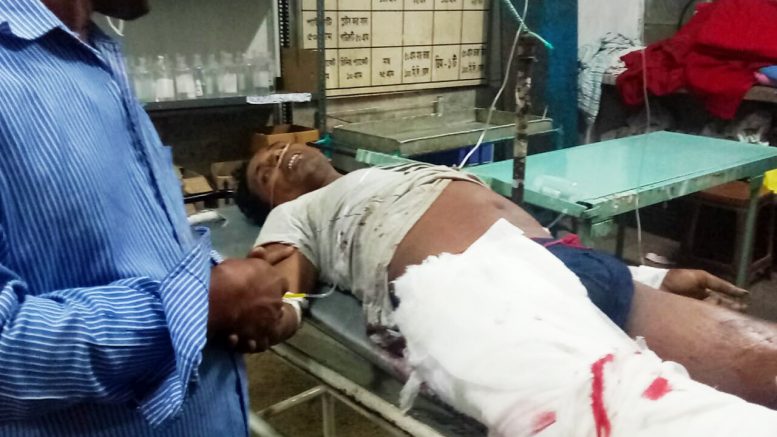 Ranaghat, March 21: A keertan singer who was hit by a lorry on NH12 on Wednesday night had succumbed to injuries and his pillion rider lost a leg as they had to wait for about two hours after initial treatment at the Ranaghat sub divisional hospital for an ambulance to be ferried to JNM Hospital in Kalyani being referred there for better treatment.

Biswa (48) and Krishna Das (49)continued bleeding with fatal injuries while waiting to be transferred to Kalyani as their family members and police frantically continued searching ambulances for about two hours till 1.30am.

Biswa Das, a resident of Ranaghat Kalaighata died on the way to Kalyani at about 2 am, a little after a private ambulance arranged by police, began the journey. He was declared dead on arrival at the JNM Hospital in Kalyani, whereas the pillion rider Krishna’s right leg had to be amputated later. Biswa Das being taken to ambulance

A doctor at the JNM hospital said, “Crucial time was lost while waiting for ambulance. One of the patients died apparently due to huge loss of blood. His life could be saved if arrived well in time. The condition of leg of the other was critical, still we could have more time to save the limb”.

Superintendent of Ranaghat sub divisional hospital Sudip Sarkar acknowledged the delay to transfer the patients. “I heard about the incident. It is true crucial time for treatment was lost to shift the patients due to unavailability of ambulance”.

Police said, late on Wednesday night three keertan singers, Biswa Das, Krishna Das and Sanjit Das while returning home riding a motorcycle had a head on collision with a stone chips laden truck near Ainshtala crossing on NH12 in Ranaghat town. A patrolling vehicle of Ranaghat police took them to Ranaghat sub divisional hospital and informed their family members.

Trouble began when after preliminary care; doctors referred Biswa and Krishna to JNM Hospital in Kalyani. But, it took at least two hours for Police and family members to arrange the ambulances to ferry them to Kalyani.

Swapan Das, son of Krishna Das said, “There was no ambulance at the hospital. We found one ambulance parked inside the hospital premise, but told that it used to ferry newborns and expectant mothers. There used to be a number of ambulances available at the hospital premise. But, we found none. We called a number of private ambulance services. But, they either did not respond or claimed to be out in service. Police officials also tried simultaneously but failed to arrange until about 1.30am when they called two ambulances from Pairadanga, about 7 km away from Ranaghat”.

The two ambulances began their journey at about 1.30am. “But, it was too late as Biswa uncle died on the way after non stop bleeding for about two hours. On the other hand, my father’s right leg which was critically injured had to be amputated. The unavailability of ambulances made these irreparable losses”

“I heard about the incident. It is true that crucial time for treatment was lost to shift the patients to Kalyani due to unavailability of ambulances” – Dr. Sudip Sarkar (Superintendent, Ranaghat SD Hospital)

Confirming this hospital superintendent Sudip Sarkar said, “It is quite unfortunate that none of the seven ambulances was present on Wednesday night despite they are to serve 24 hours. Senior police officers also called me today and pointed out this. I shall call explanations from these ambulance operators and take action against them in consultation with higher authorities”.