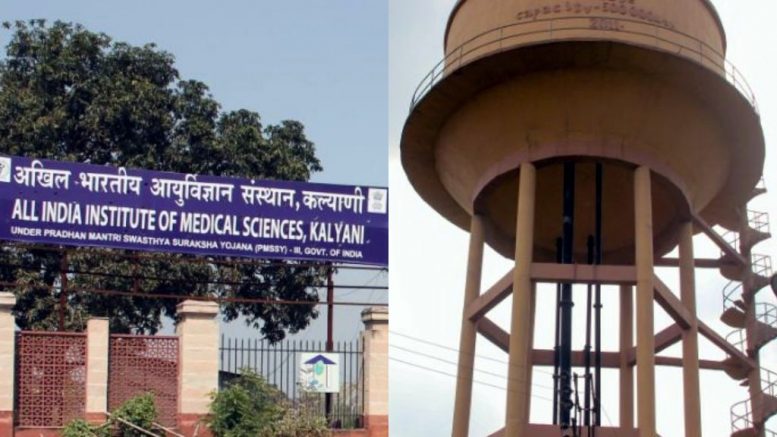 AIIMS Site in Basantapur and the Reservoir in Haringhata

Kalyani, Oct. 15: The state Public Health Engineering department authorities have offered to supply 700-kiloliter (KLT) clear water on daily basis to the All India Institute of Medical Sciences (AIIMS) site from its Haringhata based reservoir on temporary basis so that the ‘Out-Patient Department’ (OPD) could start functioning from April next year as planned by centre.

The PHE authorities have told the centre’s monitoring team on AIIMS that they would be able to begin this temporary supply from December this year while undertaking the construction of a dedicated 20 million liter (MLT) water plant simultaneously.

This temporary arrangement would continue until the PHE completes setting up the dedicated water supply plant for the AIIMS that is undergoing construction on 179.82 acres of land in Kalyani’s Basantapur.

The supply of clear water that appeared to be a stumbling block before launching of OPD from next year even a few days ago as the dedicated water plant would take around five years to complete, the state government made this alternative arrangement on temporary basis to meet up the daily need from the surplus water of Haringhata based reservoir.

Executive Engineer of PHEs Nadia Division Sanat Adhikary said, “The AIIMS told us that they initially require 700 KLT water regularly. We can easily meet up this requirement from the surplus water of the Haringhata reservoir until the dedicated plant is completed. Our existing infrastructure for water supply which includes the 500mm dia main pipeline that goes in front of the AIIMS site will be used to supply water there. We would just tap out a supply line inside the campus”.

Sources said, the Haringhata based PHE reservoir that was inaugurated by former chief minister Budhdhadev Bhattacharya during 2011 has a gross capacity of containing 35MLT water. “However, we bring only about 23 MLT to the reservoir from our Kalyani plant considering the present requirement of the people living in the area. We will be easily meet up the AIIMS’s present requirement of 700KLT from this stock”, a PHE official said.

At present after lifting water from river Hooghly, it is processed at Kalyani’s main plant located on the Barrackpur Expressway and then sent to Haringhata based reservoir to supply in adjacent areas.

Executive Engineer Adhikary said, “At present only about 23MLD water is required for Haringhata which is more than actual consumption. So there would be no problem to supply only 700 KLD water to the AIIMS. Even if their requirement increases by the next few year during construction of the dedicated plant, there would be no problem at all to ensure supply of water there”.

A senior officer of PHE in Calcutta said, “The centre’s representatives who are monitoring AIIMS in Kalyani told us about initial requirement of 700KLT clear water. If their demand is increased after launching of medical college, staff quarters by 2020, we would get more supply to increase our stock at the Haringhata reservoi   r and ensure supply to AIIMS”.

A senior health department officer part of state government’s monitoring team said, “This temporary arrangement of the PHE has relieved us from a big concern. We were worried as it was initially planned to get water supply from the dedicated plant”.

PHE officials in Calcutta said, for the dedicated 20MLT water supply project, water will be lifted from Hooghly river near Bansberia which will be brought to the treatment plant at the Kalyani Tuberculosis Hospital premise. Processed water they will be supplied AIIMS site.

PHE Nadia division Executive Engineer said, Sanat Adhikary said, “The planning and designing of the project have been completed. We have started stacking of pipes and expect to begin work once certain formalities are completed”.

A PHE official in Calcutta said, “The work being delayed due to pending approval of the Calcutta Port Trust and Inland Waterways authorities. An environment impact analysis is not completed”.

Meanwhile, a team of union health ministry that is monitoring the ongoing construction work of AIIMS in Kalyani in last month has asked agencies to complete their work fast to meet OPD launch target by April 2019 and admission of first batch of 50 students in August 2019. It has also planned to make AIIMS fully operational by March 2020.