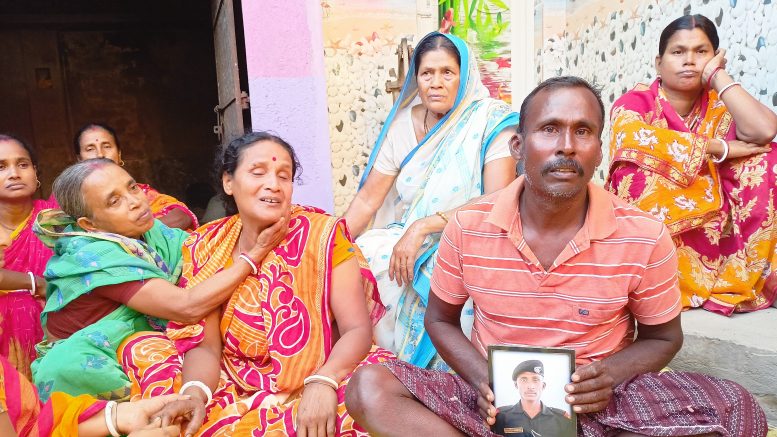 Palashipara, Oct. 07: A telephone call from U.P’s Jhansi changed the mood of Nadia’s Hanspukuria Refugee Para overnight. A pall of gloom has descended in this nondescriptive village on Thursday night ever since the news of local youth Sukanta Mandal’s death was conveyed by the Indian Army to the family. Sukanta, 22, was one of the two Indian Army personnel, who was killed when the barrel of a T-90 tank had burst during a field firing exercise in Babina Cantonment Field Firing Range near Jhansi on Thursday evening. Subedar Sukanta Mandal was leading the exercise along with other personnel when the explosion occurred. Three other personnel were injured in the incident and were admitted to the army hospital in Babina cantonment.

The accident reportedly occurred when the personnel was reloading shells to the barrel of the tank as it went off suddenly.

Youngest among two siblings, Sukanta was very popular in the locality. The news of his death gave a jolt to the local residents. The residents of Refugee para suspended all Vijoya celebrations since the shocking news arrived.

“The news is a big shock for all in the village. I talked to him on Thursday morning before his training hours began…He was fine and sounded quite excited about his scheduled homecoming on October 13. But a phone call from Jhansi shattered all excitement and planning”, Sukanta’s elder brother Utpal said.

“An official told me over the phone that Bhai died during a field exercise…we have no clear idea how he died actually”, Utpal added.

Rinku Mandal, the mother of the deceased jawan, who has been crying inconsolably, said, “I told my son to come home during puja. But he was not granted leave for the ongoing training programme. Finally, a few days ago he told me about his plan to visit home on October 13….since then we were waiting eagerly for his arrival….but now his coffin would arrive”.

As per the information received by the family, the mortal remains of the deceased jawan are expected to arrive on his home turf in Hanspukuria on Saturday afternoon. The body would arrive at the Dumdum airport in a special aircraft, which will be escorted to his home by a team from the Indian Army.

Subdivisional officer of Tehatta Moumita Saha told The NfN, “We are aware of the bizarre incident that claimed the life of the army jawan from Hanspukuria. However, there is no official communication received so far from the Indian Army or from the state government. Nevertheless, we are preparing for the arrival of the mortal remains of the soldier. We are in touch with the family of the deceased jawan and all support on behalf of the state government would be extended to the bereaved family”.