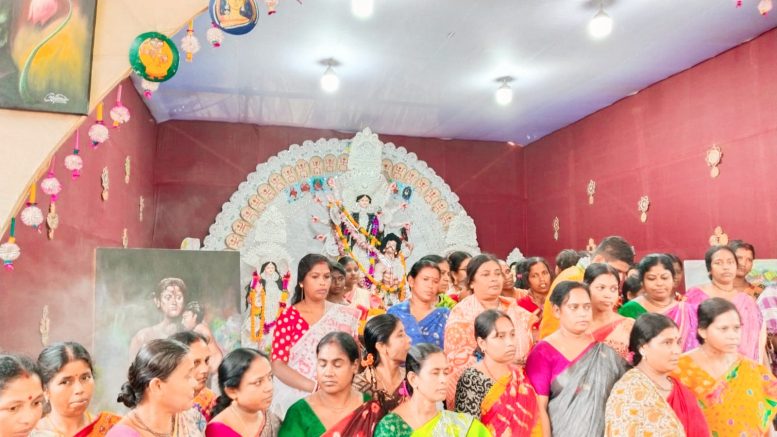 Aranghata, Oct. 3: The Aranghata Upendra Memorial Institution, a higher secondary school in Nadia, stands as a unique exception being the only school in the state that officially organizes Durga puja at its campus located in the School para area of the township.

The puja that was started in 1948 by a group of Hindu refugees from East Pakistan (Now Bangladesh) on the school ground as a community puja, eventually turned into a school event during the early parts of the 80s.

The puja turned 75 this year, and the school authorities have been officially organizing it for about the past 40 years with the collective support of contemporary students, teachers, and non-teaching staff.

This year, a group of former students of this 120-year-old school joined the puja to make the event a landmark one.

The popularity of the puja has now gone beyond the boundaries of the school campus, making it a bigger community event with the involvement of the local people, who join hands with teachers and students during the 5 days.

However, the school does not collect any subscriptions from the local residents. The entire expenses of the event are sourced by the donations of the teachers and non-teaching staff, as well as one-time subscriptions of the students.

Teachers, non-teaching staff, and students despite puja vacations sincerely attend school during the festive to discharge their responsibilities.

On Sunday – to mark the Maha Ashtami, the school students paid a tribute to the “working mothers” as a recognition of their great role in and outside the home.

This year the school authorities have conceptualized the puja on a theme titled “Amar Maa-Amar Garbo” (My mother-My pride). To execute the theme, 50 mothers, who work in the brick kiln, on construction sites, or as farm laborers, were felicitated by 50 students of the school.

Reciting the hymns of Rigveda, the students felicitated the “mothers” with flowers, sweets, and saris making a row of them before the deity.

“This is a tribute to the Durgas in real life. The Goddess Durga in real life has been epitomized as the working mother who regularly toils for sake of her children. There are many students in our school who are the children of such mothers. A large number of people living in the area belong to the working class. We have tried to cultivate respect for these mothers in the mind of our students”, said Barun Sengupta, a teacher in English, and the brain behind this year’s puja theme.

Local sources said, after independence in 1947, a large number of Hindu refugees from East Pakistan settled in Aranghata. Durga puja was then an exclusive family event for some rich families in the area. In 1948, the refugees joined hands to organize a community Durga puja on the school ground. Mohini Mohan Chakraborty, contemporary headmaster of the Aranghata Upendra Memorial Institution took the lead role to organize the event.

The present headmaster Debasish Tarafdar said, “The pain of social isolation prompted the migrated Hindus to organize the Durga puja on the school ground. Local people joined hands to organize the puja collecting subscriptions. The school has a little role at that time. But gradually involvement of the school increased and eventually during the early 80s, the school authorities formally began organizing the puja. There has been no exception in the tradition since then.

Teacher Barun Sengupta said, “The puja has become a collective financial responsibility of the teachers, students, and the non-teaching staff. All of us pay as per our capabilities and fortunately, we need not use the school’s own funds. Rather we try to utilize the balance amount for tangible development of school”.

Sanjit Dutta, a researcher, and expert in the history of Nadia said, “We generally see school organize Saraswati puja. But Durga puja being organized by school is never heard”.

However, sources in Hooghly claimed that in 1954 a community Durga puja was started on Jirat Colony school ground by its headteacher BK Ghosh involving local people. But it could not be continued further