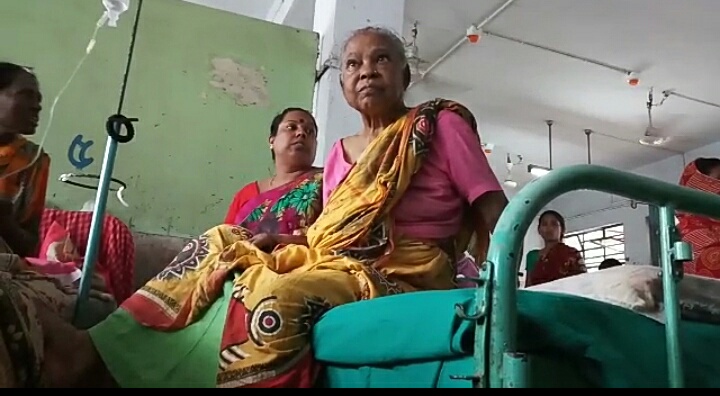 Radha Banerjee, who was beaten up by female attendant

Ranaghat, June 21: A 70 year old woman suffering from delirium and admitted to Ranaghat sub divisional hospital was allegedly beaten up by a female attendant on Wednesday night as she ‘spoiled’ her slumber. The elderly patient who is actually cardiac patient and had a fall in her blood sugar level, was partially stripped, pulled down to the floor from her bed and beaten up mercilessly tying her hands and legs with another bed throughout the night unleashing a panic among the patients and their relatives in the hospital.

In a similar incident that occurred in the , a young patient admitted with abdominal pain was beaten up by a male attendant because he protested his attempt of putting another patient in his bed. The youth was punched repeatedly on his face until he started bleeding and rescued by some staff of the hospital.

The embarrassed hospital authorities that received two separate complaints, have requested the Ranaghat police to start investigation forwarding the complaints to it.

But, the Ranaghat police authorities have categorically said that cases  against the accused attendants cannot be initiated unless specific complaints are lodged with them.

In the first incident Radha Banerjee was allegedly beaten up by attendant Arati Biswas after the elderly woman started talking irrelevantly due to delirium. The woman, who was admitted on June 18, was allegedly brought down to floor, stripped off, tied with another bed and beaten up. Her son Partha Banerjee, an LIC agent said, “I arrived at the hospital early in the morning and found my mother lying on the floor. She was writhing in pain. There was no cloth on her except a blouse and a petty coat. There were injury marks on her hands and body. Other patients admitted in the ward told me that attendant Arati severely beaten up her in last night”.

In the other incident a male ayah Pradip Sarkar allegedly beaten up patient Sarojit Karmakar on Wednesday night when he protested against his attempt to put another patient on his bed.

Sarojit , a resident of Panikhali of Dhantala, admitted since June 17 with abdominal pain, was overpowered by two other ayahs when Pradip punched

and kicked him, causing injuries on his face and eye.

Sarojit said, “The attendant for his comfort to look after patient was insisting me to share bed with another patient, which I refused. I protested his attempt to put patient on my bed, when he turned violent. I started bleeding as he punched on my face. Some hospital staff rescued me”.

Since the complaints were lodged both the accused attendants went absconding.

Hospital superintendent Sudip Sarkar said, “I do not allow attendants in the hospital. But, the relatives who could not look after their patients on their own usually take their help. They also introduce them as their family member or relatives. We always discourage this practice, but a section of relatives insist for their service”.

“We have received the complaints and forwarded those to police for the probe”, Sarkar added.