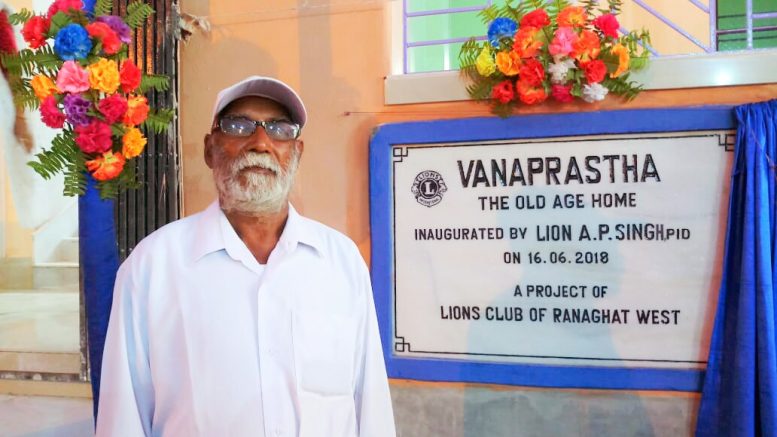 Santosh Das in front of 'Vanaprastha'

Ranaghat, June 22: A 73 year old ration dealer in Nadia’s Ranaghat has donated 2-bigha land to a social welfare organisation that has constructed an orphanage and an old age home  respecting his wish.

Santosh Das, a resident of Shyamnagar village, who is known in the area as a ‘good Samaritan’ for his benevolence is quite elated as the Ranaghat unit of Lions Club has materialised his dream by constructing ‘Gurukul’ – the orphanage and ‘Vanaprastha’ – the old age home on the land donated by him.

The 2 bigha land where the building has come up, is located in Kumarsatpur village adjacent to NH34 in Ranaghat town, which is valued around Rupees 35lakhs.

Earlier this week the Lions Club authority launched 5200 square feet spanned four storied building for use that accommodates three separate blocks under same roof titled ‘Gurukul’, ‘Vanaprastha’ and ‘Indraprastha’. The ‘Indraprastha’ is made for the elderly inmates and children so that they could enjoy their leisure there through reading books, listening music, taking foods and for recreational purpose. The Lions Club has so far spent Rupees 1.5crore for the project out of an estimated project amount of Rupees 3-crore.

“I am delighted to see that my dream has been materialised. I am grateful to the Lions Club members of Ranaghat. I have just donated the land, but without their initiative this could not be made possible”, said Santosh Das.

Manoj Agarwal, a member of Ranaghat unit of Lions Club and president of organisation’s ‘Kolkata-Howrah-Nadia’ District said, “It is a great pleasure to us too that we have been able to made his dream into reality. It was his brain child; we have just shaped up it”.

In his earlier life Das worked as machine operator at a printing press in Khidirpore in Kolkata. Around forty years ago he came to Ranaghat and started living there. He joined a printing press in the town. But, later started own business after getting a ration dealership. He purchased the two bigha lands in Kumarsatpur village later from own earning in the name of his wife Basanarani Das.

“I had a plan to build a school for orphans and poor. I purchased the land for it. I could not even pass Madhyamik due to poverty. So I had a dream to help poor boys in their education. However, I realised that it would not be possible for me only to build such school. So few years ago I offered the land to a local organisation to build a school for poor and orphans. They agreed to my offer, but did nothing. Later two years ago, I offered the land to Lions Club expressing my desire. I changed my plan a little and requested them to add an old age home to the project. They agreed and made it into reality”, said Santosh Das.

“My objective was to include orphanage with the old age home is interlinked. It would be an opportunity for the boys to get the affection of grandparents like elderly inmates, whereas the later would get the joy being at home taking care of the children”, added Das.

Lion Club’s Manoj Agrarwal said, “It was a nice plan to build an affable relationship that we find between grandchildren and grandparents”.