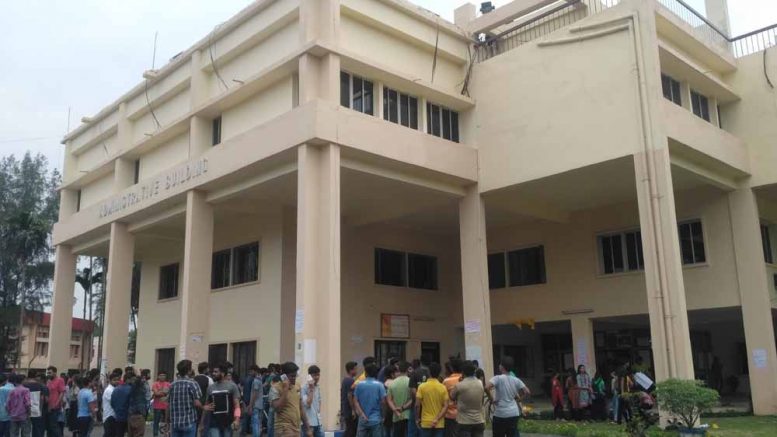 Mohanpur, Sept. 14: In a late evening development at BCKV, vice chancellor professor Dharanidhar Patra has issued an order asking the all students and researchers to vacate the nine hostels on Saturday located inside the university campus. This include the international hostel, where students from abroad stay. The students, however, decided not to leave the hostels.

Officials and teachers of the University claimed that evacuation of the hostels would lead to suspension of classes for indefinite period being it a residential university. The VC, however, could not be contacted for clarification. His cell phone was found switched off.

BCKV Registrar Professor Jayanta Saha claimed having no official confirmation of the order. He said, “I have heard about it, but not officially received it. I also could not contact the VC for clarification”.

Meanwhile, in a landmark development education minister Partha Chatterjee has asked all the ‘stakeholder’ of the university to meet him in Kalyani on Saturday. Registrar Jayanta Saha said, “The education minister through the district administration has asked all the stakeholders of the university to meet him at Farmers’ Training Institute in Kalyani at 12.30. These include the teacher, students and other officials of the University administration” boycotting their classes on Friday have extended time up to Monday for vice Chancellor Dharanidhar Patra for submitting his resignation as well as removal of dean agriculture faculty from his post, which they have been reiterating since Wednesday in the wake of attack on them by miscreants.

The time was extended apparently after the vice Chancellor fell ill late on Thursday night as he was kept gheraoed at his chamber by the agitating students until he agreed to lodge a fresh police complaint naming a local Trinamul Congress Chatra Parishad leader for leading a gang of miscreants to attack them and ransacking the campus. The students claimed that VC, despite his illness assured the students to attend office on Friday to issue an order removing dean of agriculture faculty prior to submit his resignation. However, nothing happened as demanded by the agitating students who boycotted classes and waited eagerly throughout the day for VC in front of his office.

An agitating student said, “VC on last night agreed to file fresh FIR naming a Trinamul leader. He also agreed to issue removal notice of dean of agriculture faculty. He also had given us written undertaking. He told us that he would come on Friday afternoon to office and do all these. But, he escaped. Moreover, on Wednesday he announced removal of security in charge and dean of students’ welfare. But, no such order was issued at all. So we expected these orders also”.

VC Professor Patra, however, spent the entire day at his official residence inside campus. He also did not take calls and meet officials. His wife said, “He is ill and not in a position to talk”.

This, however, angered the agitating students, who, accused him of saving the dean and later in the evening gathered in front of his residence and demanded a meeting with him. But, they were told that VC not fit enough to talk.

Earlier a large section of the teachers of the University who represents four different organizations had also boycotted classes on the day expressing their solidarity with the students. They also walked with students and went to VC’s house demanding a meeting.

Subhash Koley, a teacher and secretary of Teacher’s Association said, “We have told students to continue agitation in democratic way. Their grievances are genuine. We all the teachers’ organizations are unanimously supporting them and boycotted classes condemning the attack on students including girls.  We will continue to boycott classes until and unless the VC issues order removing the two deans. We are hopeful that normalcy would restore and students would return to classes if he at least does this apart from lodging a proper police complaint identifying the miscreants who attacked students”.